Senator Ben Nelson Has To Go 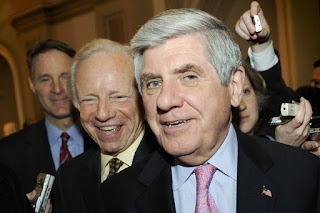 Quick thought: Is Sen. Ben Nelson (D-NE) a Democrat because he doesn't get along with Republicans at the state level? I mean, he votes with the Republicans, talks like a Republican, was Bush's "favorite Democrat," and is currently the main obstacle to health care reform in this country.

He has stated his opposition to the "public option" (then sort of recanted, but not really), and is now refusing to agree to block Republicans from filibustering health care. The Senate leadership is not asking all Democrats to vote for the bill, they are simply asking them to vote, procedurally, to allow the bill to come to the Senate floor -- avoiding a GOP filibuster.

However, Nelson will not commit to this simple task. As a Nebraskan and a Democrat (for now anyway), I will not be able to support Nelson in any way, if he allows for a GOP filibuster on this important national priority. It is time for Nelson to put up or shut up. He has three choices: Be a Democrat and do what he was elected to do, resign from the Senate and allow someone else a chance, or switch parties.

Nationwide, Democrats raise money for other Dems, and it is simply wasteful to support Ben Nelson in this way if he gives the finger to the party's priorities. At the state level, valuable party resources are wasted on the DINO. I hear so many people saying that they have voted for Nelson because he's "better than a Republican." I don't think so. He is worse. He takes our money, he takes our support, he uses our volunteers, and then he votes with the other party. He is not better than a Republican.

Senator Nelson, this is your last chance. Do the right thing, or get out of the way. If Nelson blocks health care, no Democrat should give a nickel to his campaign. For that matter, don't give to the Nebraska Democratic Party or the DSCC unless it is expressly stated that Nelson gets none of the money. Senator Nelson's constituents are his boss, not the insurance and pharma lobbies. He needs to understand this a little bit better.
Posted by Dave Splash

Nelson must be getting a load of money from the insurance industry. I mean, it is called "Mutual of Omaha", right?