The Republican Science Fair Had Few Attendees This Year 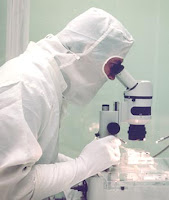 I shouldn't be surprised by this, yet I am. According to a new Pew Research Poll, only 6% of all American scientists identify themselves as Republican. I suppose when you think the world is only 6,000 years old, deny evolution, think global climate change is a myth, argue that more arsenic in drinking water is healthy, believe that microscopic cells in a petri dish are the equivalent of a person, and misunderstand the correlation between diet and health, you wouldn't have much success in science.

I worry for the country's future when nearly half of the country rejects even the most basic of scientific consensus.
Posted by Dave Splash

Oh come on, the dinosaurs DID co-exist with man. ;)

"6% of American scientists identify themselves as frickin' retards."