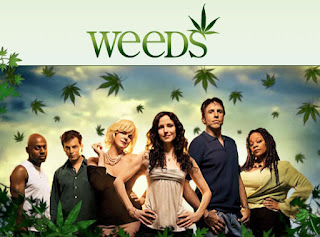 Showtime's best series about a sexy, suburban, housewife who sells drugs, Weeds, returns tonight for its fifth season. So far, the reviews of the season opener have been mixed. But seeing as how TV critics are among the most useless people on the planet, that will not dissuade me from watching.

Last season ended with Nancy getting caught informing to the feds about her boyfriend, Cesar. Cesar planned to kill her until he saw the ultrasound photo that supposedly shows his baby inside of Nancy. So, either the picture is a fake, and it is some ploy to give Nancy time to get away; or the picture is real and she is about to have the baby of a huge Mexican drug lord who is on the verge of being taken down by the feds. Neither scenario seems all that great. Guess I'll find out what happens tonight.
Posted by Dave Splash