Though this week could hardly have been considered action packed, it did contain one seriously great event: Wednesday's St. Vincent concert. It will be a while before something tops that, and it's doubtful that that "something" will occur this weekend.

Tonight, I am planning on staying in and finishing up the next podcast. It is, obviously, way over due. For the next episode, Keith and I bring you some of our favorite cover songs. Hopefully, some of them will be new to you. I'll obviously take a break to catch tonight's Real Time with Bill Maher. Tonight's guests (Richard Haass, D.L. Hughley and more) are not too exciting, but I never miss an episode, regardless. Tonight's show can't be any worse than last week's with John Bolton and Heather Wilson (R-NM). Somehow, Bill let both guests get the better of him. It was a rare moment of wingnuts getting the upper hand on Maher's show. I hope it doesn't happen again.

Assuming I get the podcast done, I'd like to hit Slowdown Saturday night for the Starlight Mints / Evangelicals show. Never seen the Mints, but Evangelicals were pretty impressive last year when they opened for Headlights at Waiting Room. 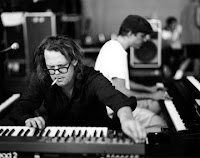 I am planning on doing a special segment on Sunday night's show focusing on the late Jay Bennett. I'm going to play some of his solo stuff, as well as Wilco tracks on which he is prominently featured. I will also be delving into the new Sonic Youth record, The Eternal, which comes out next week. It's really good! Make sure to tune in Sunday at 9 pm (central) and remember, the show streams at 897theriver.com.
Posted by Dave Splash