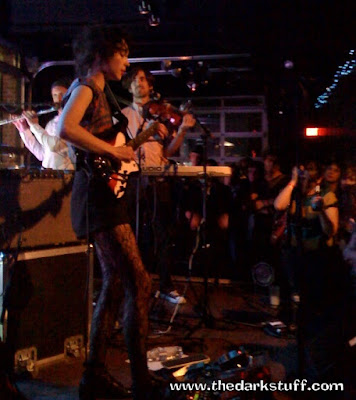 Wow. Another thoroughly enjoyable St. Vincent show last night at The Slowdown. Armed with two years of listening to her music, I was way better prepared for dealing with the unbridled awesomeness that is Annie Clark (aka St. Vincent) last night. Despite some minor quibbles that I have every time I see a show in the front room of Slowdown (too crowded, no sight line), last night's concert was exceptional. I am such a geeky fanboy when it comes to St. Vincent that I can't even stand it. I got right up to the front of the stage just as she was going on, and discovered that there were quite a few others just like me. Sadly, I was the oldest, but that is becoming common these days when I go to see new bands. In this case, however, it felt a little more obvious. I mean, does St. Vincent have any fans over the age of 21? WTF?! I tried to imagine that all of these kids were listeners of my show, and were there due to my constant playing of St. Vincent. I didn't actually ask anyone, mind you, I just imagined. But I digress... 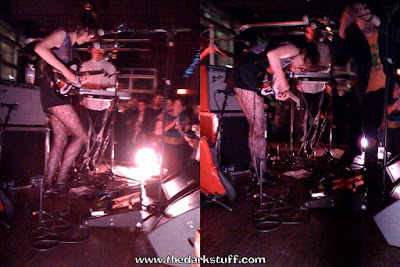 The set drew heavily from St. Vincent's new record, Actor; and unlike the last time I saw her perform, she played with a full band this time. Annie's guitar playing was phenomenal, and I loved watching her rock out with that whammy bar. In another life, she could have been in a metal band. Fortunately, we're living this life, and she isn't. Like Tim from Lazy-I, I would liken St. Vincent's music to Kate Bush (with hints of Robert Fripp and Brian Eno as well). Considering I was never much of a Kate Bush fan, I'm not entirely sure why this comparison works for me. It's the voice I guess: huge range, delicate tone, and the real use of her voice as an instrument. Maybe I should pick up a Kate Bush greatest hits disc or something and re-evaluate.

There simply are no current artists to whom I can compare St. Vincent. She is in a class by herself. Midway through the show I moved to the back of the room so I could hear the music better (another problem with the front of Slowdown is the positioning of the PA speakers). Once I did, I could hear all of the cool things Annie was doing with her voice. She utilized two microphones (see below), and each had different effects mixed in. She was able to better replicate the intricacies of the vocals on the record by doing this, but you could only notice it if you heard it through the main speakers. I doubt my description did it justice, but it sounded very cool. 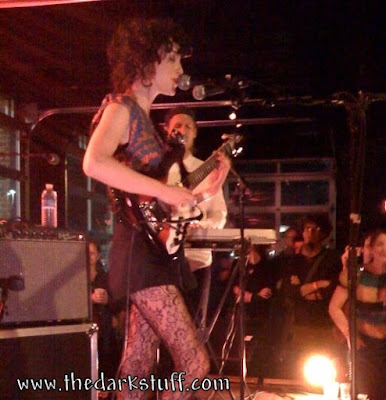 Bottom line, buy both St. Vincent albums, and go see her if she plays in your town. In addition to making compelling, original music, Annie Clark is quite gorgeous, as well. So, if that is what it takes to get you off the couch, then go check out the hot woman wailing on the guitar. I won't offer to give your money back if you don't end up liking St. Vincent because, frankly, we won't be speaking if you don't.

Opening act, Pattern Is Movement, was pretty good. Had a Pere Ubu vibe, mainly because of the vocals. I wasn't paying a ton of attention, to be honest, but that is the impression I got. I'd give 'em another shot, for sure.
Posted by Dave Splash

I wouldn't describe myself as a fan after having seen her twice and not being wowed by the actual songs themselves, but each time I have been fascinated by her guitar playing, which I admit is some of the more effective I have seen in some time. I can definitely hear some Fripp-ish stuff in it, and the atmospherics she makes are good. It sounds like you saw a good show!