Killing Doctors and Bombing Clinics Is Terrorism. There Can Be No Disputing This

There's been a lot of push on the pro-choice side to identify the murder of George Tiller as an act of domestic terrorism rather than a simple murder or 'abortion clinic shooting.' It's a push I agree with. But there's a detail in Zack Roth's follow up piece on the shooting that puts the issue in a much more concrete light. Roeder, the suspect in Tiller's murder, had apparently twice tried to vandalize another clinic in the last two weeks -- and in a way that suggested it might be setting the stage for a more serious break in. An employee at the clinic managed to get Roeder's license plate number and reported it to federal authorities, only to be told that nothing could be done before a grand jury had been impaneled.

It seems difficult to imagine that similar suspicious behavior, let alone actual vandalism, would have generated such a passive response if the clinic had been a synagogue or a federal building and the suspect had an Arab name. 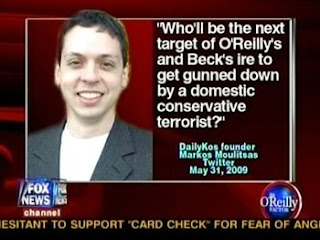