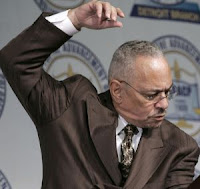 I never bought in to the notion that because Pres. Obama was a member of Jeremiah Wright's church that he was somehow responsible for everything ever uttered by Wright. That was classic guilt by association, which the right has trademarked. I also wasn't willing to distill a man's career (in this case, Wright) into a few seconds of sound bytes. I was sort of agnostic, in a way, on the question of Jeremiah Wright during the election.

But there were many liberals (and many African-American liberals) that defended, and even agreed with, Wright's rantings. I did not. I wondered how a man could associate himself with someone like Louis Farrakhan, and spout out extremely anti-Semitic statements (some that would make Ahmendijad blush), yet consider himself a religious man. But, to me, I simply could not believe that Obama harbored any of the same vile beliefs that Farrakhan and Wright did. I still do not. But the question of whether or not "Reverend" Jermiah Wright is truly an anti-Semite has been answered. He is.

In an interview published yesterday at Daily Press, the good Rev was asked whether or not he has had any communication with the President since their public falling out during the campaign. He answered, "Them Jews aren't going to let him talk to me."

Now, that statement could not, in any way, be attributed to Wright's "views" on Israel or the Palestinians, so spare me that argument. This was about people who are Jewish, and his dislike of them. He was not joking, he was deadly serious. There is no way around it. Jeremiah Wright is a bigot and a scumbag. I don't believe that should reflect on Pres. Obama. It's all Wright.

I continue to support President Obama. I think he's doing a great job, all things considered.
Posted by Dave Splash