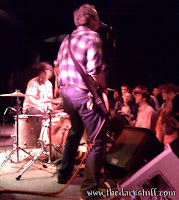 Believe it or not, I actually left my crib last weekend and made it out to the Waiting Room for the Mike Watt & the Missing Men show. Super glad I did. I've been a fan of Watt/fIREHOSE/Minutemen for going on 20 years, but it has been more than 10 since I'd seen him live. Some of that was due to Watt's tenure with The Stooges, and part of it was due to Watt being sidelined with an injury for a long time. Whatever the reason, it was good to see the guy again.

Watt's new band is stellar, and that is saying a lot considering some of the people he has played with over the years. I was tipped off by a friend of mine from Minneapolis that Watt's set would be featuring a ton of Minutemen songs. He also said that Grant Hart and Greg Norton (formerly of Husker Du) joined Watt on stage for the encores. For serious Husker Du fans, this was big because the two had not performed together since the last Husker show in December 1987. Whoah. 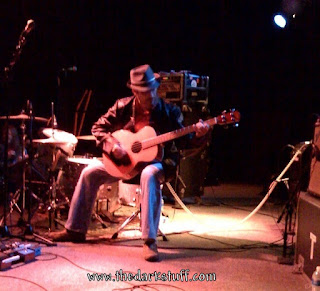 Former Husker Du bassist Greg Norton 5/16/09 @ The Waiting Room, Omaha
But that kind of thing happens often in cities like Minneapolis or New York or LA, but rarely in a place like Omaha (unless you count the occasional Conor Oberst or Cursive surprise shows). Saturday night was an exception to that rule, as Greg Norton followed Watt down to the Big O, and surprised the audience with an impromptu solo set before Watt played. The "set" was really just Greg noodling on the bass and hitting the drums for a few minutes, but hey, I never got to see Husker Du, so this was the first time I'd ever seen the guy in person!

Norton remained on stage for the first couple of Watt's songs, and then hung out in the crowd pogo-ing and shouting out Minutemen song titles. I think he really enjoyed getting back out there. 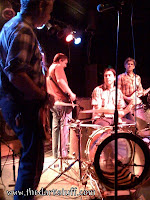 As I mentioned earlier, Watt's new band is stellar. And like my friend told me, the set was full of Minutemen songs. But nothing from fIREHOSE and nothing from Watt's first two solo albums (I don't own the third as it is pretty bad). Ever since fIREHOSE broke up in 1994, Watt has acted as if that band never existed. He never plays those songs, and he never talks fondly about the records, the tours, nothing. I wanted to ask him about this, but instead, decided to yell out "Makin' the Freeway" whenever it got quiet (I figured that was a fH song that Watt could still perform). Didn't help.

Greg Norton re-joined the band for the encores, which of course, featured "The Red and the Black" from Blue Oyster Cult. Afterward, I decided against chatting up either Norton or Watt as I was pretty exhausted and pretty deaf (I was standing in front of a speaker most of the time). But I am super psyched to have been there, and am very much looking forward to hearing Mike Watt's next album. As you might have guessed, Husker Du has been getting a shit ton of plays on my ipod since then, and I opened Sunday night's radio show with "Flip Your Wig." 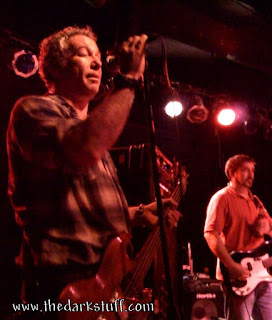