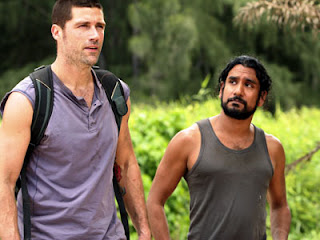 I have gone ahead and cleared my busy schedule for tonight so that I can watch the two hour season finale of Lost without interruption. Last week's episode was amazing for those who (like me) find John Locke to be the most compelling and important character on the show. It also brough back Sayid, who had been M.I.A. since shooting Ben a number of episodes back.

There is bound to be some serious shit happening tonight as a number of this season's storylines will all come together. In the present day, there is Locke and the others march toward the mythical Jacob and Locke's stated intent to kill him. Now that Locke has risen from the dead, he may be the most powerful force on the island -- including Jacob. There is also the new revelation that Charles Widmore is Daniel Farraday's father and that Daniel was, in fact, killed in 1977. While back in 1977, Jack and Sayid are taking up Farraday's theory that detonating the hydrogen bomb located on the island will shut down the series of events that in 2004 caused Oceanic 815 to crash. Kate does not agree and intends to stop him. The rest of the time travellers are aboard the sub that will take them off the island and return them to the US in 1977.

At some point, the two time lines have to meet. My theory revolves around Locke's killing of Jacob, and the notion that, in doing so, Jack, Kate, and the rest are brought to the present day. Or it could be the bomb, or it could be that Jacob kills Locke. Or Richard Alpert does. Who knows. Regardless, I see the two time lines merging tonight. I also wouldn't rule out Ben in all of this. I don't buy his whole "submission to Locke" thing for one second.
Posted by Dave Splash