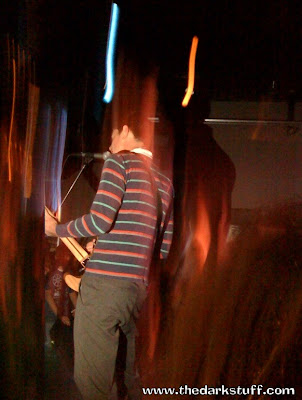 As predicted, The Thermals show last Saturday night at Slowdown was great. I missed both openers because I wasn't feeling well, and didn't have the stamina for three bands. The Thermals played in the front room of the club (aka Slowdown Jr.), so the place appeared more full than it actually was. Most of the crowd was jammed in up at the front, which made maneuvering around the room a bit difficult. When I tried walking around, I was met with some serious resistance, and had to push a few folks around. Sorry if you were one of the people I shoved, but, damn, get out of the way next time! 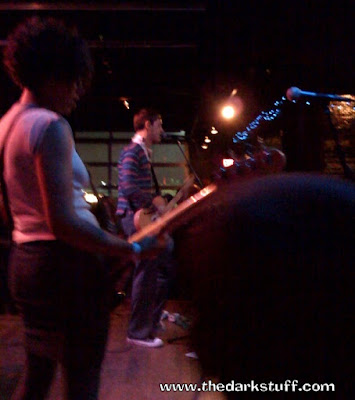 The set was a little more than an hour, and featured a lot of tunes from the two most recent CDs. The Thermals had no shortage of energy on stage, and I could barely get a picture of sexy bassist, Kathy Foster, that wasn't blurry. Damn, that woman moves fast!

Ordinarily, the sound at Slowdown is quite excellent, but on Saturday it definitely was not. It sounded really bad. The Thermals had their own sound person, and she did not know what she was doing. It got better after about 15 or 20 minutes, but still...All things considered, I wish this show would have been at Waiting Room. It would have sounded better, been less crowded, and been closer to my house.

Bottom line, however, is that I liked The Thermals before the show, and still like them afterward. If you have yet to see these guys, make it a point. Also, grab the new CD, Now We Can See.
Posted by Dave Splash

Email ThisBlogThis!Share to TwitterShare to FacebookShare to Pinterest
Labels: Concerts, Omaha, The Thermals