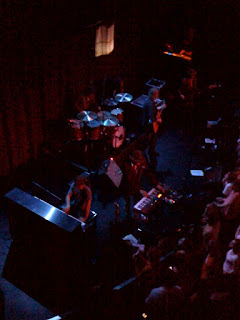 I really enjoyed last night's M. Ward show at Slowdown. I could bitch about how far away I had to park, but you know, I showed up at the very second Mr. Ward went on, so I guess all the good spaces went to the early birds. The set began with one of M. Ward's best tunes, "Chinese Translation" from his Post-War album; and for the next 25-30 minutes, Ward and the band tore through a number of the more rocking tunes from the new album, Hold Time.

For me, the highlight of the show was seeing a few hundred twenty-somethings singing Buddy Holly and Chuck Berry songs at the top of their lungs. I'm sure most of them knew that "Roll Over Beethoven" was a cover, but I'm not so sure they realized "Rave On" was. It was cool, nonetheless. Ward does a number of great covers on the new album.

After that initial 30 minutes or so, the show slowed down some. The guys switched up instruments a few times, and then ran through selections from some of the earlier albums. I took off before the encore, so I'm not sure what happened with that. All in all, a very enjoyable show.

I'm planning on hitting the Thermals show on Saturday at the Slowdown. They are a fun live band, and the new album, Now We Can See, is really good.
Posted by Dave Splash