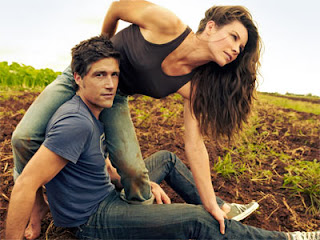 Lost is only sort of new tonight. It's being billed as a "Lost Special" that aims to tell the story of the Oceanic Six from a different perspective. Hmmm. The official ABC Lost website spins it like more of a re-cap of the current season. I don't suppose I really need a re-cap since I've seen every episode, but maybe they will focus on something that I missed or did not realize was very important.

This season has been stellar (as most have been). I like the whole return to the 1970s and seeing the Dharma Initiative as something more than ancient history. But the same question keeps coming to my mind week after week: where did everyone else go?

I mean, there was the Oceanic Six. They left the island, were gone for three years, and have now returned...30 years earlier. Then, we have the core group of those who remained on the island (Sawyer, Juliette, Miles) who have made a life for themselves as members of the Dharma Initiative. But what about the other 30 or so people that remained? Where are they? When are they? How has no one discovered them. In theory, they should be in the same time period as Sawyer and Juliette, for example, but they have not been seen (or even mentioned) since last season.

I guess, then, that I have another question sort of on the same lines. Charlotte died earlier in the season because of her extended exposure to the island. She was there as a child. Before she died, she told Daniel that she remembered being told not to come back to the island by Daniel when she was little. We then saw a little red-headed girl with the Dharmas when the cast was thrown back to the 1970s. Ok, that was her back in the day. Then, we saw a young Ben Linus with the Dharmas, who Sayid eventually shot. But Ben is not in the 1970s, he's in the present day along with Sun and Locke. The assumption has always been that you cannot go back in time and "see yourself" at a different age because that's not how it works. Yet, last week we learned that Miles, too, was on the island as an infant (yet he didn't die) and he saw himself playing with the father he never knew. How does that work? And Daniel was with Miles, Sawyer, and the lot in the 70s, yet he somehow disappeared and got off the island? Ummm....what? Did he take the other 30 or so missing people with him? I am so confused.

I wish there was a new episode tonight to answer this stuff, but I'll have to wait until next week.
Posted by Dave Splash