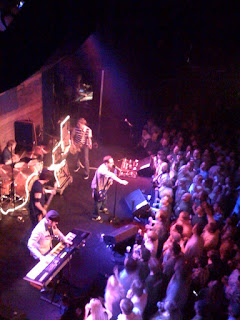 This will be an abbreviated post on last night's Hold Steady show since I didn't stay for the whole thing. Yeah, I was a big pussy. Deal with it. What I saw was great, though. Lead singer/guitarist Craig Finn was his usual nerdy, spastic self. The band slammed through most of their best tunes (I'm assuming "Chips Ahoy" was played after I left) at breakneck pace, and barely took a long enough break to even say, "Thanks Omaha." The crowd at the sold out show seemed to love every minute of it; and from the balcony, I noticed more than a few in the audience singing along to every song. 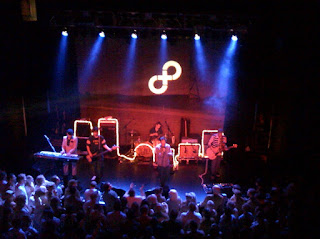 I guess I'll blame over-indulging at last night's Passover seder for why I was so tired and had to leave the gig early. Believe me, I was the only one leaving at that time.

Tonight, at the same place and same time, Conor Oberst and the Mystic Valley Band will be performing. I'm hoping I get a second (or maybe third) wind later tonight and can make it out. Getting old sucks.
Posted by Dave Splash