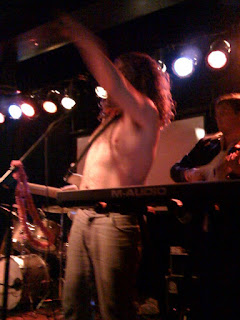 Apologies on the lack of posts. Let's get caught up. First and foremost, I attended the Beep Beep CD release show last Saturday night at Waiting Room. I hadn't seen the band since they last stopped touring in 2005. Since then, Darren Keen (aka The Show Is the Rainbow) has joined the band as its bass player. He did his usual shirtless thing as you can see from the picture I took. TSITR also played as the middle act on the bill. I missed the first band.

To be honest, the gig was not that great. It was extremely short and it seemed like the band barely knew the material. If they played more than one song from the first album, I must have missed it. Still, I'm warming up to the new CD, Enchanted Islands. It could be one of those sleeper albums that I realize is amazing a few months from now. To read more about the band, Lazy-I has a nice feature on them.
Posted by Dave Splash