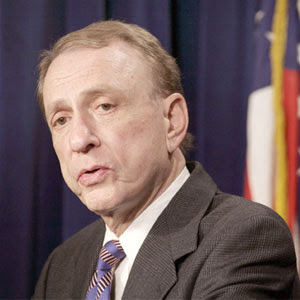 So Senator Arlen Specter (D-PA!) is leaving the Empire, er, the GOP, and coming to the Democrats. I'm obviously happy about the move, but Specter is a confusing guy. For one thing, he was part of the Warren Commission and signed off on that idiotic "Magic Bullet Theory." In the 1970s, he personally vouched for murderer Ira Einhorn when he was arrested and requested bail. Einhorn then fled the country and remained a fugitive until 2001.

Specter has been a Republican Senator since 1981. Prior to that, he held a number of local and state offices in Pennsylvania. He was a Democrat until 1966 when he officially changed parties. He has changed back today.

I've never understood the concept of a Jewish Republican, which Specter was until this morning. The GOP seems to the party of socially conservative, Christian Evangelicals and little else. Evangelicals may be pro-Israel, but they are not "pro Jew" to put it bluntly. There seem to be some intolerance there. The old school, "Rockefeller Republicans" who were socially moderate, and fiscally conservative are a thing of the past. I'm surprised Specter didn't leave the GOP earlier.

Specter is a political opportunist, if nothing else. As a Democrat, I certainly realize this. I don't see him as a completely reliable, Democratic vote. But he and Dems have made a deal, and I assume they are comfortable enough with Specter to trust that he will be with them most of the time. If no Democrat is supposed to challenge Specter in the 2010 PA elections, then he better be. As long as he's better than Joe Lieberman and Ben Nelson, I'm fine with it.

In typical, over the top, paranoid fashion, the Republicans are freaking out, and Senate Minority leader Mitch McConnell said this is a "threat to the country." Classy, Mitch. Interesting how there was no "threat" when the GOP controlled the White House and had both houses of Congress. It's called Democracy, guys. Some times you win and sometimes you lose. If you're a Republican, you must be feeling like a loser right about now.
Posted by Dave Splash

Absolutely. There was no threat from within to our democracy when the GOP had the White House and Congress. But now that the Dems control it all, the threat is suddenly very grave.

It's all relative, I guess.