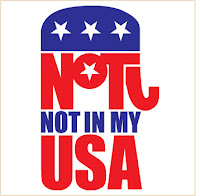 Dear Republican Leaders: The Republican Party has become the party dedicated to sabotaging the American future. You Republicans are the arsonists who burned down our national home. You combined the failed ideologies of the Religious Right, so-called free market deregulation and the Neoconservative love of war to light a fire that has consumed America. Now you have the nerve to criticize the "architect" America just hired -- President Obama -- to rebuild from the ashes. You do nothing constructive, just try to hinder the one person willing and able to fix the mess you created.

I used to be one of you. As recently as 2000 I worked to get Senator McCain elected in that year's primary. (McCain and Gen. Tommy Franks wrote glowing endorsements regarding my book about military service, AWOL.). I have a file of handwritten thank you notes from Presidents Ford, Reagan, Bush I and II. In the 1970s and early 80s I hung out with Jack Kemp and bought into his "supply side" myth and even wrote a book he endorsed pushing his ideas.) There's more, but take it from me; my parents (evangelical leaders Francis and Edith Schaeffer) and I were about as tight with -- and useful to -- the Republican Party as anyone. We played a big part creating the Religious Right.

In the mid 1980s I left the Religious Right, after I realized just how very anti-American they are, (the theme I explore in my book Crazy For God). They wanted America to fail in order to prove they were right about America's "moral decline." Soon after McCain lost in 2000 I re-registered as an independent in disgust with W. Bush. But I still respected many Republicans. Not today.

How can anyone who loves our country support the Republicans now? Barry Goldwater, William F. Buckley and Ronald Reagan defined the modern conservatism that used to be what the Republican Party I belonged to was about. Today no actual conservative can be a Republican. Reagan would despise today's wholly negative Republican Party. And can you picture the gentlemanly and always polite Ronald Reagan, endorsing a radio hate-jock slob who crudely mocked a man with Parkinson's and who now says he wants an American president to fail?!

With people like Limbaugh as the loudmouth image of the Republican Party -- you need no enemies. But something far more serious has happened than an image problem: the Republican Party has become the party of obstruction at just the time when all Americans should be pulling together for the good of our country. Instead, Republicans are today's fifth column sabotaging American renewal.

President Obama has been in office barely 45 days and the Republican Party has the nerve to blame him for the economic and military cataclysm he inherited. I say economic and military cataclysm because without the needless war in Iraq you all backed we would not be in the economic mess we're in today. If that money had been spent here at home on renovating our infrastructure, taking us toward a green economy, putting our health-care system in order we'd be a very different situation.

As the father of a Marine who served in George W. Bush's misbegotten wars let me say this: if President Obama's strategy to repair our economy, infrastructure and healthcare fails that will put our troops at far greater risk because the world will become a far more dangerous place. So for all you flag-waving Republicans who are trying to undermine the President at home -- if you succeed more of our troops will be killed abroad.

For the party that created our crises of misbegotten war, mismanaged economy, the lack of regulation of our banking industry, handing our country to rich crooks... to obstruct the one person who is trying to repair the damage is obscene.

Just imagine where America would be today if the 14 to 20 million voters -- "the rube base" who slavishly follow the likes of Limbaugh -- had not voted as a block year after year thus empowering the Republican fiasco. We would have a regulated banking industry and would have avoided our current financial crisis; some 4000 of our killed military men and women would be alive; over to 35,000 wounded Americans would be whole; we would have been leaders in the environmental movement; we would be in the middle of a green technology boom fueling a huge expansion of our economy and stopping our dependence on foreign oil, and our health-care system would be reformed.

After Obama was elected, you Republican leaders had a unique last chance to send a patriotic message of unity to the world -- and to all Americans. You could have backed our president's economic recovery plan. Since we all know that half of our problem is one of lost confidence and perception, nothing would have done more to calm the markets and project resolve and confidence than if you had been big enough to take Obama's offered hand and had work with him -- even if you disagreed ideologically. You had the chance to put our country first. You utterly failed to rise to the occasion.

The worsening economic situation is your fault and your fault alone. The Republicans created this mess through 8 years of backing the worst president in our history and now, because you put partisan ideology ahead of the good of our country, you have blown your last chance to redeem yourselves. You deserve the banishment to the political wilderness that awaits all traitors.
Posted by Dave Splash