When Will the Media Apologize To Gary Condit? 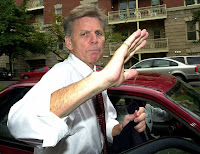 (Jeff Cohen, Huffington Post) For four months beginning in May 2001, major U.S. media outlets, including all three cable news channels, took the American public for a ride -- perpetrating a hoax that a married congressman was somehow involved in the disappearance of a female intern.

As I witnessed the farce from inside cable news, I could see it was all about ratings and had nothing to do with journalism.

This week -- with these same outlets reporting a "break" in the 8-year-old murder case -- would be a good time for TV news executives to look back and give the public a big, fat apology.

TV news served up its spectacular four-month sideshow at a crucial historical moment. During this period in 2001...

 Roughly 20 Al Qaeda terrorists -- including two on the CIA terrorist watch list -- were deploying across our country, while Zacarias Moussaoui was arrested in Minnesota due to weird behavior at a flight school, and George Bush received a presidential briefing memo titled "Bin Laden Determined to Strike in U.S."

 John Ashcroft's Justice Department was devoting vital resources to surveil prostitutes in New Orleans and medical marijuana clinics in California, while rebuffing (on Sept. 10, 2001) the FBI's request for $58 million in additional counter-terrorism funds for agents, analysts and interpreters.

 Defense Secretary Donald Rumsfeld was demanding billions in "Star Wars" funding to defend America from ballistic missiles, while threatening a presidential veto (on Sept. 9, 2001) over a Senate proposal to shift $600 million from space-based weapons systems to counter-terrorism.

As they were failing to notice or report deadly serious news during these months, an army of TV "news" personnel engaged in a mindless, feverish, daily pursuit of a previously obscure congressman, Gary Condit.

This weekend it became even clearer (it was clear to rational folks back in 2001) that Condit had nothing to do with the disappearance of D.C. intern Chandra Levy.

Major media now report that authorities are about to arrest Ingmar Guandique in the Levy murder -- a man who pled guilty in 2001 to two separate assaults on young women in the same part of D.C.

There'd never been any evidence against Condit (a conservative Democrat from central California). He was never a police suspect. But he had a sexual relationship with Levy before she disappeared, and that's all television news needed to construct its biggest news-opera since Clinton/Lewinsky.

TV news executives would like us to forget this whole bizarre episode. But we shouldn't forget. I can't, since I experienced that loony summer inside Fox News Channel, where I was an on-air contributor.

From May to Sept. 11, cable news channels covered no story more than Condit/Levy. Not the economic slowdown, not California's energy crisis, not Ashcroft's or Rumsfeld's misguided priorities, and certainly not something or someone named Al Qaeda. Al who?

For months until the morning the Twin Towers were hit, it was Condit -- not bin Laden -- who was the most despised man in America. Especially on cable news, where Condit was linked week after week to murder, with no end to speculation about how he'd caused the tragedy. Perhaps Levy died during rough sex with the congressman. Or her death was connected to Condit's ex-con brother. Or Condit's buddies in a motorcycle gang. Or because Levy was pregnant with Condit's baby.

A few newspapers also fed the frenzy. The Washington Post published a page 1 exclusive about an alleged affair Condit had years earlier with a teenage girl. The story was based on the girl's father, a minister, who later admitted he concocted the tale.

Amid the conjecture that filled hundreds of hours of cable news, Paula Zahn on Fox News interviewed a "world-renowned psychic" from California, who asserted that Chandra Levy's body was in a Washington. D.C. park by "some trees down in a marshy area."

PSYCHIC: This girl -- I am sorry to tell you this, but this girl is not alive.


ZAHN: How do you know that, Sylvia? Has this been something that you've been spending time thinking about and analyzing?

PSYCHIC: No, no, no. Paula, you know, you can either be one place or the other. If you're not here, you've got to be there.

ZAHN: And why are you so convinced she's there?

PSYCHIC: Because I'm a psychic. I know where she -- I know she's there. She was gone very quickly after she was first missing.

Ironically, the psychic's speculation turned out to be more accurate than much of what passed for informed analysis on the story. (A year after Levy's disappearance, her skeletal remains were found in D.C.'s Rock Creek Park where she'd been jogging.)

This embarrassing chapter in TV news history also played a role in the cable news ratings war, as Broadcasting & Cable reported in Aug. 2001: "Helped by the Chandra Levy mystery, Fox News Channel is continuing its ratings tear, besting CNN for the sixth consecutive month. Fox News' prime-time ratings have climbed one-tenth of a point each month since the former intern vanished in May."

The public humiliation of Gary Condit cost him his political career. But it boosted many TV careers, including mine. My role was peculiar -- I was part of the media frenzy while constantly denouncing it: "In the dictionary, when you look up 'media circus,'" I said on Fox, "you'll see a picture of Condit, and behind him Geraldo and O'Reilly and Larry King."

I blasted the recurrent TV segments that asked, Is there too much coverage of the Chandra Levy disappearance? -- which, I complained, was "a way of adding to the overkill, while pretending not to."

Near the beginning of the Condit-fixion, I warned that "if it turns out that Chandra is a victim of random street crime, I think some in the media are going to owe a Richard Jewell-type apology to Congressman Condit." (Jewell was the security guard who ultimately received payouts from news outlets that had suggested he planted the bomb at the Atlanta Olympics; the actual culprit was an ultra-right terrorist.)

Sure enough, writer Dominick Dunne later gave Condit an apology and an undisclosed sum to settle a suit stemming from Dunne's fanciful third-hand fable told on talk radio, CNN and elsewhere that Condit was involved in a Washington sex ring of Arab diplomats, which somehow led to Levy being kidnapped and dropped into the Atlantic Ocean from a private jet.

Noting how all the "talking heads from the O.J. Simpson and Lewinksy stories" were returning to TV for the Condit case, I joked on-air that I wouldn't be "satisfied until I hear from Tonya Harding" -- the Olympic ice skater implicated in an assault on her top competitor. I soon got my wish: Larry King actually interviewed Harding about Condit.

Hey, Larry, I was just kidding!

During my final prime-time appearance about Condit in August 2001, an enraged pundit urged him to resign from Congress and "slither away and never be heard from again." My immediate response: "What's the mainstream media going to cover when he does go away?"

I soon got my answer.

Eighteen days later, U.S. intelligence picked up chatter from intercepted conversations among Al Qaeda members indicating an imminent attack: "tomorrow is zero hour" and "the match begins tomorrow." That night, cable news was offering its own chatter - the latest gossip on Condit.

The next morning, hijacked jets torpedoed the Towers -- wiping Condit's forgettable and banal image off of TV screens for good, replaced by the haunting visage of bin Laden.

Never before had a "news" story of such absolute dominance disappeared so abruptly.

TV news owes an apology to Condit -- and to the public. I'm not holding my breath waiting.
Posted by Dave Splash

Email ThisBlogThis!Share to TwitterShare to FacebookShare to Pinterest
Labels: Media