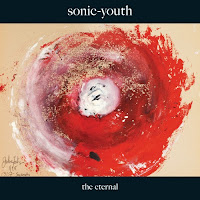 One of my all-time favorite bands (and the one that closes my radio show every single week), Sonic Youth, have revealed details about their next album. The band's first "indie" album since 1990 (they have been with Geffen since that time) will be called "The Eternal" and will be released by Matador Records on June 9.

The album will be co-produced by the band and John Agnello, and this record will feature the recording debut of former Pavement bassist, Mark Ibold. No word on why Sonic Youth needed a second bassist, but it's Sonic Youth, so I'm sure they have a good reason.