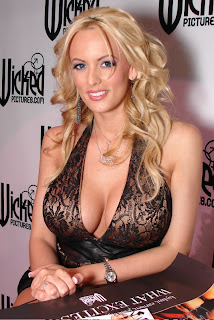 (Raw Story) A website has launched a petition in an effort to draft adult entertainer Stormy Daniels to run against Louisiana Republican Sen. David Vitter -- and the would-be challenger granted her first interview at an Arizona hotel, where she was performing at a strip club.

"While traveling through Arizona last week, I learned that Daniels would be performing at a Phoenix strip club," Daniels said in an interview with muckraking reporter Max Blumenthal. "I tracked the adult-video starlet down at her hotel and filmed the first interview with her since the Draft Stormy initiative began. During our exclusive interview, Daniels homed in on what she called Vitter's hypocrisy, declaring her intention to make his contradictory behavior the centerpiece of her campaign."

"Originally the focus wasn't even about making me as a candidate," Daniels said. "I think it was about bringing attention to the Senate race in general and then the response was overwhelmingly positive and, you know, I think everyone is just running with it."

Vitter's phone number was found in the records of the D.C. madam who apparently committed suicide last year and may have led to the resignation of CIA director Porter Goss. Now he could get a sampling of what he may have already sampled: an eyebrow-raising woman who's paid to perform. Only this time, it could be at the ballot box.

"A Storm's A Brewin..." the Draft Stormy website says. "A Storm that’s gonna sweep Louisiana clean of corrupt politicians once and for all! And that Storm’s name is Stormy. Stormy Daniels.

Blumenthal says Vitter is positioning himself to the right of center as the midterm elections approach.

Vitter also recently mocked the inclusion of anti-sexually transmitted diseases measures in the recent stimulus bill on the Senate floor.

Eager for a challenger that could mock if not unseat Vitter, an ad appeared on Craigslist recently seeking "a female in some aspect of the adult-entertainment industry" to run against Vitter, Blumenthal notes.

"Part publicity stunt, part political psy-ops tactic, the Draft Stormy initiative has already forced Vitter's scandalous past back into the limelight," Blumenthal writes. "The Louisiana Democratic Party denied any involvement in creating the website, but it is not complaining about Daniels' involvement in the race.