My Re-Cap of Last Night's Lost 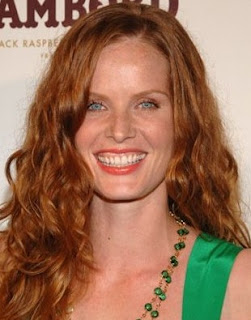 DAMN! Lots of interesting shit on last night's Lost. The first thing being that Charlotte (sexy Brit Rebecca Mader) died as a result of the constant time shifting taking place on the island. In all honesty, she wasn't a major character, as she didn't enter until the 4th season. Still, it would seem that she played a bigger role than had been previously revealed. Before she died, she told Daniel that she had lived on the island as a girl when her parents were part of the Dharma Initiative. Two things are important to glean from that. First, it explains why she was the first to die from the time travel. She had the most exposure to the island, and therefore, the effects hit her the worst. Second, she revealed that she had been told by a "scary man" not to ever return to the island. That man was, apparently, Daniel. She previously had not remembered or acknowledged that.

The next big thing that came about in last night's episode was the possible revelation that Jack Shephard's father is the mystical Jacob. I say "possible" because he never actually said he was Jacob, but he sure knows a lot of secrets about the island. He was the one who instructed Locke on how to leave the island, but only after scolding him for not following the instructions he gave last time the two met. Regardless, he showed Locke the special wheel underneath the Orchid station that caused the island to move, and told him how to correct its rotation so the island would stop shifting in time. If he ain't Jacob, he must be his #2.

The rest of the show dealt with the Oceanic Six and Ben's attempt to get them to come back to the island. Jack is down with the return, but Kate, Hugo, Sayid, and Sun are definitely not. Sun changed her mind once Ben "proved" Jin was still alive, but the rest of them are skeptical, to say the least. On their way in to see the woman who can locate the island, they bumped into Desmond who came to LA to look for Daniel's mother. Turns out, the two women are one in the same.

Next week, we'll see whether or not the group can truly go back, and we'll also find out what will happen if the entire group does not return (as hinted in the preview). I have a feeling they will get the rest of them to agree. Still, I'm curious as to why Locke's body needs to be returned (will he somehow come alive once back on the island), and why he was calling himself Jeremy Bentham. What did he end up saying to the former castaways? Where is Charles Widmore in all of this? Will he find the island the same way Daniel's mother did? He obviously knows her, since he gave Desmond her address. Where has Claire gone, and who is she in relation to Jacob? She appeared in a vision last season warning Kate not to bring Aaron back to the island, yet Jacob appears to want them all to return. Or does he? When speaking to Locke, Jacob chided him for listening to Ben too much. Where are the remainder of the castaways that remained on the island (i.e. Rose, Bernard, etc.)? And what about Daniel? He knows a helluva lot more about the island, Widmore, time travel, and everything else island related, than anyone else. When will he start to finally reveal what he knows and what is real connection to the island really is?

Does your heard hurt from all of those questions? Mine kind of does.
Posted by Dave Splash

I "Lost" track of that show partway through the third season! 8-)

It was starting to get like "Twin Peaks"... kind of like the writers were making it up as they went along. I'm a David Lynch fan, so with "Peaks" it was merely mystifying. With "Lost" I just wasn't getting it, starting around the time of the black mist thingie and the training film in the bunker.

Just the same, one of these days I plan to rent the couple of seasons I've missed. I imagine I would get back into it if I gave it a try.