KISS Will Record a New Album. Long-Time Fans (like me) Ask Why 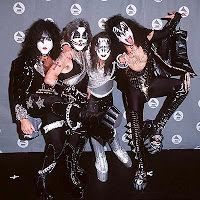 (from Page Six) THE founding members of Kiss are pushing 60, but they won't stop rocking. Paul Stanley tells Page Six that he, Gene Simmons and the band are headed into the studio to grind out their 42nd record for release this fall. "It's a Kiss album in the most true and classic sense - we're recording it in analog, not digital, and writing it ourselves," says Stanley, who also paints and will hold an exhibit Feb. 27-28 at the Wentworth Gallery in Hackensack, NJ. Stanley, who's expecting a new baby with his wife, Erin, any day now, says groupies still chase him and his fellow fossil-rockers: "They are there in abundance. The only thing that changes is whether you choose to indulge. But the buffet is always there!"
-------------------------------
This is totally unnecessary. No one needs a new KISS album. When they re-fired Ace and Peter, I decided it was over for me.
Posted by Dave Splash

Hmmmm. If I want to hear something new by an old band nowadays, I'll probably hope for a new King Crimson release. Not that the world is clamoring for that either, but like you say, a new KISS album is totally unncessary.

What was that title for the Zappa album of ages ago... "We're Only In It For the Money?" Hmmm.

I appreciate the showmanship KISS has contributed to rock 'n roll over the years but they haven't put out a really good album since the late 70's.