The Haps for the Next Few Weeks 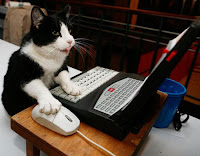 Omaha has been a major drag these last couple of weeks, and therefore, I have not had much to post about. But the next week or two boasts some reasonably decent shows, so I may be more active. Tonight at Slowdown could be an interesting show. Girl Talk is performing, and I have been hearing lots of good stuff about him. The show is sold out, which is not really an issue for me except that I hate crowds. Still, I haven't been to a good concert since November, so I may be willing to fight my way through the hipster masses.

Next week, on Thursday the 15th, Tapes N' Tapes comes back to town and plays the Waiting Room. The first time I saw this Minneapolis band, I really liked them. The second time...not so much. But considering the time of year and all, I'm hoping that the third time is the charm. Besides, Little Brazil is opening and probably playing songs from their forthcoming new album.

The following week marks the return of Lost for the fifth season, and the return of Cursive for two nights at Slowdown. As a latecomer to Lost (but I am all caught up now), I am excited to finally be at the same place in the show as everyone else. Season 4 was a little weird (weirder than usual for Lost), and the show's formula changed a bit. Instead of all of the flashbacks to the castaways' lives before the crash, there were flash forwards to a time when some of them were off the island. As the season ended, six of the survivors made it off the island, and then the island disappeared. Suffice to say, there are plenty of unanswered questions. With Cursive, they are doing two discounted hometown shows ($5 tickets) and will likely be premiering material from their upcoming album (due out in Feb, I think). I seem to keep missing these guys when they play, so I am going to make certain to hit one of the shows this time around.

Anyways.....not too much else. Talk soon.
Posted by Dave Splash