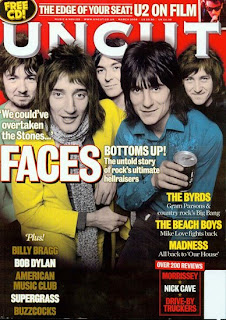 I'm all for a Faces reunion, but choosing Flea to play bass for them? WTF?! Yes, he's talented, but his style is nothing like The Faces style of bluesy rock. I think these guys are struggling to look "hip" and this will not do it.

(Music Radar) Back in their day - the early '70s, to be exact - The Faces were a sticky, sweaty blues-rock band. 'Funky' they were not. But that's likely to change, with Red Hot Chili Peppers' bassist Flea now set to record and tour with the reunited group.

When it was announced last November that Rod Stewart and Ronnie Wood were reforming the much-loved outfit - count Oasis and The Black Crowes as huge fans - speculation ran wild as to who would step in to fill the slot left by original Faces bassist Ronnie Lane, who died in 1997.

Rumours began to surface late last year that Flea had rehearsed with the band, and yesterday Ronnie Wood confirmed that the LA-based funkmeister was a lock.

In addition, he spoke enthusiastically about a Christmas trip he and Stewart took to Costa Rica, Bermuda and Miami. Besides partying, the duo wrote an album's worth of material.

"I had a great time," said Wood. "It wasn't so much a holiday but a mini-world tour."

But is he ready to jump on stage naked with only a sock covering his privates? That's the big question.

UPDATE: Both Flea and Rod Stewart are now denying the story, so hopefully, this will end here.
Posted by Dave Splash

It's funny, I asked a musician friend of mine if he liked the Black Crowes and he said "hell yeah, they're like the American version of the Faces!".