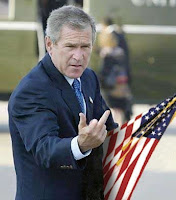 Oh, joy! Our esteemed leader, George W. Bush, is planning a 10-15 minute farewell address to the nation during prime time. It is scheduled for this Thursday, January 15, at 8pm Eastern Time. It will be the last scheduled public event of his presidency. El presidente will be speaking in front of an audience of "courageous people" he has met over the course of his disastrous time in office. What a joke.

Naturally, the country is more than ready to say farewell, but do we really need another "Bush legacy restoration" media event? Didn't we all get enough of that with his final press conference (where so few reporters showed up that interns were used to fill the seats)? Do we need to have him restate the same tired excuses for all of his failures? The same ones he and his ridiculous defenders have been using for the last seven years?

The networks have not yet agreed to air this address. Let's hope they do as Nancy Reagan used to advise and "just say no."
Posted by Dave Splash