Traitor Joe Gets To Keep His Chairmanship 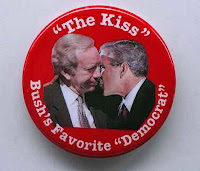 You know, I'm all for starting a new era in American politics. Post-partisan or whatever. I get it that President-elect Obama wants to "change the tone," and I respect that. Partisanship has gotten out of control ever since the 1994 Republican takeover of Congress. But we still have parties, and theoretically, one joins a party because their political ideals and convictions most closely resemble that party. And the way it works in government (again theoretically) is that the members of a party work together toward achieving certain goals that match with those aforementioned ideals and convictions. In addition, one would join a party not only because of their convictions, but also because they believe the other party has the wrong approach or is just wrong. This all makes sense, right?

Then explain to me the logic of Joe Lieberman. Joe was once a Democrat. He was such a Dem that he even became the vice presidential nominee of the party in the 2000 election. He then ran for president as a Democrat in 2004. But after his primary defeat in '04, Joe decided to follow a different path. He grabbed for dear life to the Bush Administration and the increasingly corrupt Republican Congress. While Democrats were ascending in 2006, and the country was finally seeing the truth about the GOP and Bush, Lieberman grabbed them even tighter. He was so tight with his new friends that Democrats in Lieberman's state of Connecticut selected someone else to be their nominee for the Senate in election.

So, with the support of the Republican party and the strategy of Karl Rove, Lieberman ran as an independent. His campaign was funded largely by Republicans (a fact which angered the official Republican running). Lieberman won. But everywhere else, the Republicans lost. And both houses of Congress would be under Democrat control. So, rather than join his beloved Republican party, Joe decided he'd rather be a Democrat (having the majority has many more perks than the minority). Joe had some sway because his decision to caucus with the Dems helped them claim the majority. Joe took the spoils of victory and got himself the chairmanship of the Homeland Security and Government Affairs Committee.

And as a "Democrat" with the ability to hold oversight hearings into the aforementioned Bush Administration, Joe did his due diligence and upheld his responsibilities as chairman of such an important committee. Oh wait...NO HE DIDN'T. He did not hold a single hearing on the failures of the Bush Administration, and did not exercise an ounce of oversight. He acted like a good Republican and did what he was told.

So, let's jump ahead to 2008 and the presidential elections. Joe the "Democrat" decides to back John McCain for president. He, of course, was the nominee for the Republicans. Joe not only backed McCain, but he campaigned with him for months, made international trips with him and his boyfriend Lindsey Graham, spoke at the Republican National Convention, and harshly criticized Barack Obama (the candidate from "his party"). Joe's guy lost - big time. And so did his adopted new party. Facing a dose of some harsh reality, Joe has now decided that he is a Democrat after all, and wants to remain in the majority and keep his chairmanship. And all of this without admitting he was wrong or apologizing. Pretty loyal, guy, eh?

Despite Lieberman's unwillingness to accept the consequences of his actions, he is now being rewarded by his short-term memory lacking colleagues with the ability to keep his chairmanship and position. I am flabbergasted. How can this guy be trusted? He sells out his party for political gain, and when he loses, he is rewarded. And the Democrats in the Senate somehow believe he can be relied upon to vote the way the party wants? What are they smoking?

Apparently, President-elect Obama himself wanted Lieberman to remain with the Democrats. He is practicing what he preached. Good for him. But Lieberman is a slippery one, and I would not put it past him to finally begin to do some oversight -- of Obama. Once Joe starts in on one of the Republican-style investigations into nothingness, it will be too late to get rid of him. The issue with Lieberman is trustworthiness. He lacks it. His word means nothing. He should not be allowed such a huge committee. Mark my words, this is a huge mistake.
Posted by Dave Splash

Good points made. I think the guy needed more than the slap on the wrist that he got. He demonstrates party loyalty at times, but he didn't when it really counted. The party needed to take LIEberman out behind the woodshed, but for some reason they didn't... sigh...

Also extra points for having Robert Pollard's "Miles Under the Skin" and Wilco's "Shot In The Arm" on your lastfm list! 8-)

Also, I finally got around to looking into some of your podcasts. Good stuff!

I have had a copy of My Bloody Valentine's "Isn't Anything" for a long time, but had never heard "Loveless" until recently. I've never heard anything quite like that one! It got me into all kinds of other music that has been (unfairly?) lumped into the "shoegaze" category.

I rediscovered Catherine Wheel, have been collecting their CDs over the last month or two, and have listened to little else besides that and...

Swervedriver!!! What an AWESOME band. I started with "Mezcal Head" from iTunes, then got an import copy of "Ejector Seat Reservation". Both have some incredible tunes. "Girl on a Motorbike" is amazing, and so is "Son of Jaguar E". Was Swervedriver ever noticed in the United States? I'll be listening to your Swervedriver cast for sure, I love that band!!

As for CW, I like the tunes "Crank", "Heal 2", "Broken Nose", "Satellite" and "I Want to Touch You". So far I have "Ferment", "Chrome", "Like Cats and Dogs" and "Adam and Eve" (still waiting for copies of "Happy Days" and "Wishville"!)My favorite album is either "Chrome" or "Adam and Eve" so far. I don't think Coldplay could have existed without Catherine Wheel being around first.

I also picked up some CDs by Ride and Slowdive. Might have to check out some more Lush and Chapterhouse. Love that "genre"... !

Once I get the rest of the CW discs I will probably write up some kind of band review on my blog. I love their guitarwork and Dickinson's voice.

You know what's weird, as I was reading your comment Rob Dickinson's solo album came up on my ipod, and his acoustic version of "Crank" played. Totally random. Or was it?

On the other hand...

With the Dems closing in on a super-majority, perhaps Reid (or maybe Obama) went to Lieberman and said, "Joe, it's like this: You want to keep your chairmanship, right? Good. Then here's how it's going to be...when we say, 'vote!' you respond, 'Yes sir! And just how would you like me to vote?' Otherwise, we will f*ck you like the big dog!"

Fair point, but he completely violated the trust of the Democratic caucus already, and did exactly what he wanted despite warnings and was not punished. What is going to make him think anything would happen to him if he "disobeyed" in the future. Plus, it would be disastrous politically to remove Lieberman shortly after a vote in which the Dems don't like how Joe voted. I think he will be "going rogue" as long as he wants to and the Dems will do nothing about it. The voters of CT have to get rid of Joe for us in 2012.