Tomorrow Is the Day 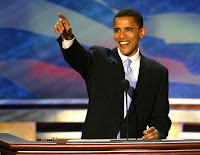 It's almost here. Election day. I'm super excited. I haven't had a presidential election go my way since 1996 (even though Gore did win in 2000, but that's another story), and it's looking like tomorrow will be going my way. Hell, even Karl Rove is predicting Obama will get over 300 electoral votes!

My plan is to wake up at the crack of dawn, make a thermos of coffee, and walk over to my polling place (it's only across the street from my house). I have no idea how long I will have to wait, but I'm guessing it won't be a quick, in-n-out kind of deal. It doesn't matter. I'm waiting as long as it takes. I'm kind of thinking that Obama will not get that one electoral vote from Nebraska's second district. I don't have any real stats to back me up, but I was scheduled to house some out of town staff at my crib who were coming in for some last minute ground game type of stuff. They ended up not needing the housing. I don't think that means they have given up on Omaha, but it probably means they are sending those people somewhere where they could get more than one electoral vote.

For me, I don't care what the numbers turn out to be as long as Obama is the winner. It would, of course, be nice for it to be a landslide. That would do two things: provide Obama with a clear electoral mandate and thus a license to enact things his way, and it would serve as the ultimate repudiation of the Bush-Cheney administration and all of its ugliness, dishonesty, and incompetence.

Regardless, it won't shut up the wingnuts. I'm certain they will try and spin away even the clearest of electoral mandates. But you know what...I don't care. That's their game, it ain't mine. They can whine and spin all they want, but they had total control of government and the media, and they blew it. Big time. It is indisputable.

Let's hope tomorrow is a day for celebrating. America is coming back.

UPDATE: I just heard the news that Barack Obama's grandmother has died. Man, what a tough break for Barack. Can you imagine the competing emotions going on inside of him? I mean, tomorrow he could be elected President of the US, and today his closest relative dies. I don't care who you are, you gotta feel for the guy.
Posted by Dave Splash

I'm just glad he got to see her recently. She must have been so proud.

Damn, I am excited for tomorrow!

I am so nervous for the outcome of this election. Thank goodness the end is near though - I'm ready to be done with all of this competition crap.