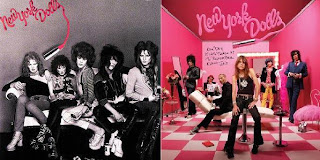 It's like it's 1973 all over again. Todd Rundgren will be producing the next New York Dolls album set for sometime in 2009. Rundgren produced the band's debut back in 1973. Since that time, of course, three of the band's five original members have died. Even so, the Dolls' last album, 2006's One Day It Will Please Us To Remember Even This, was pretty solid.

The Dolls back in the day:

Looking forward to hearing this. I always felt like the first one had decent songs but the recording was pretty messy.