Before I dissect last weekend for you (oh and there is no much to say...), I wanted to say a few words about this season's episodes of Dexter. I do not know how the writers did it, but they have actually managed to top themselves yet again.

Dexter is the only show that I have to see every week on the day it airs. I mean, I race home from doing my radio show every Sunday night and have the episode rolling on my DVR within two minutes.

The addition of Jimmy Smits to the cast this season is a genius move. First off, who is Smits' agent? He must be the best in the business, as Smits has been in some major stuff: LA Law, NYPD Blue, The West Wing, Star Wars, and now Dexter. What a resume. His character (Asst. District Attorney Miguel Prado) this season is unfolding into a really dark S.O.B.

It's nice for Dexter to have a real friend, but I am seriously questioning the wisdom of letting Prado in so close. Prado sensed something was up with Dexter, and even gave him a candidate for him to stalk and kill (which was way too obvious and shows Dex is exercising some poor judgment). But in last night's episode, Dexter revealed nearly everything. He started referencing his "code," took Miguel on one of his pre-kill stakeouts, and then took him to the store to stock up on supplies for the "kill room." Dex was not without his reservations, but when Miguel referred to his own "darkness," I think the dye was cast. And when Miguel said he wanted to be the one who actually did the killing, I was shocked that Dexter agreed.

I guess even serial killers need friends, too, but Dexter needs to remember that Miguel is an ambitious prosecutor. He's considering running for District Attorney of Miami. He is a pretty high profile guy, and not someone used to being in the shadows. Furthermore, he is smart -- smart enough to realize that James Doakes was not the "Bay Harbour Butcher" from last season, and that Dexter was. I see him using his authority and holding that knowledge above Dexter to take a leadership role in their new endeavor. I don't see this "friendship" ending well. 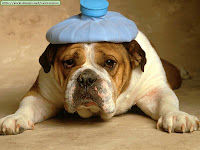 Enough Dexter. Let's move on to something else. How about my radio show? Well, it sucked last night. Not sure exactly why, but it did. I really half-assed the playlist and I think it showed. My only excuse is that I thought I was having an aneurysm for much of the weekend. No lie. I had a throbbing head ache for, like, 36 hours. I couldn't sleep. I tried everything to make it go away: aspirin, Tylenol, weed, valium. Nothing worked. I got some type of prescription pain pills from my folks, and they knocked me out at least. By the time Sunday rolled around, my headache had dissipated, but I was pretty exhausted. I banged out the show real quick and moved on. But I will have a better show next week to make up for this week's mediocrity.

There has been a real lack of quality shows in Omaha lately, which means it's officially winter. Few bands have the guts to travel through the Midwest during this time. But that all ends on Thursday with the Darker My Love show at Slowdown. I have high expectations for this show because their new record is so good. Same goes for Sebastien Grainger (formerly of Death From Above 1979), who will be playing at Slowdown on the 25th. I'm only 50/50 on whether or not I'm going to see Jeremy Enigk on Thanksgiving Day. I like his first solo album, but that came out in 96. I have no idea what his newer stuff sounds like, and I was never much of a Sunny Day Real Estate fan to begin with.

Hmmmm...anything else? Not really. Still feeling good about the election results after two weeks. My dad was in DC and bought me a bootleg Obama Inauguration t-shirt he found out there. I guess DC is going through some Obama-mania along with the rest of the country. How many more days till Bush is gone?
Posted by Dave Splash

Sorry to hear you were feeling so gross. Do you think it was a migraine?

Could have been. Never had one before. It's gone now, so I guess we'll find out if it returns...