Staring Down the Barrel of Another Weekend 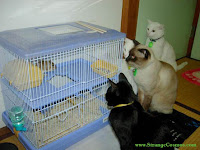 It's looking like another kinda quiet weekend for me, folks. There is a small chance I might go see Crooked Fingers tonight at Waiting Room, but mostly because of opener, Little Brazil. According to Lazy-I, the band will be performing mostly new material from their forthcoming third album. It will be the band's first for Anodyne Records, an indie label based in Kansas City. I have often likened Little Brazil to 90s icons, Superchunk, and hope the new material continues in that fine tradition. Tickets for the show are $10.

Maybe I'll go and volunteer some more at the Obama office. Last night, I made calls to voters in Omaha and it went better than I thought. At first, I thought I would simply be calling registered Democrats and reminding them about early voting or something like that. Actually, I was calling a mix of Republicans and independents, finding out who they were voting for, and if persuadable, I was to attempt to persuade them. I only had a few hang-ups, and actually had some interesting conversations with Republicans who were leaning Obama. It was weird. It was like they were looking for a reason to vote Obama, and it just needed to be presented to them. Many recited the same tired smears from the McCain campaign that the media keeps repeating hour after hour. But I was able to refute all that Ayers, Acorn nonsense pretty easily, and I think I got a few switch-overs. I guess we'll find out in 18 days...

Beyond that, I wish I had more to report. I just don't. Maybe I'll have more later.
Posted by Dave Splash