One of the Dumbest Things I've Ever Heard Of 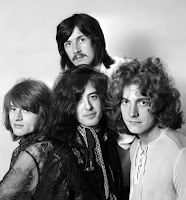 According to Reuters, Led Zeppelin are seriously considering recording and touring without lead singer, Robert Plant. I cannot believe the ridiculousness of this idea. First off, the idea of a bunch of aging rockers in their 60s strutting around on stage as though no time has passed since their glory years is just sad. Zeppelin had their time, and it ended 28 years ago. Robert Plant is obviously wise to this notion.

Second, what is the real motivation behind this "reunion." Unfinished business? Changing their legacy? Making money? Having sex with groupies again? I mean, Led Zep has one of the most solid legacies in all of rock. They are almost universally liked and respected. They are a fixture on rock radio, and will be that way until the end of time. They are undoubtedly multi-multi-millionaires, and should continue to see royalties rolling in long past their deaths. Is it groupies? Somehow, I doubt that could be the motivation.

Bassist John Paul Jones said they have already auditioned new singers, and cited Queen as an example of a band forging a new career with a new lead singer. News flash! Freddie Mercury is dead. It's not as though he is just passing on a reunion.

I never got to see Led Zeppelin perform since they broke up when I was nine years old. I did, however, see Page/Plant in 1995 and enjoyed it. The two played and sounded great, but the burden of carrying the Led Zeppelin name was not there. Regardless, that was 13 years ago. I thought Jimmy Page looked seriously old then, I wonder how he looks now.

Please guys, don't do this. It won't end well. And despite what you think, people will not pay exorbinant ticket prices to see Jimmy Page, John Paul Jones and some dude on vocals. Just ask Journey or Judas Priest. Your reputation will be forever tainted. Let it go.
Posted by Dave Splash