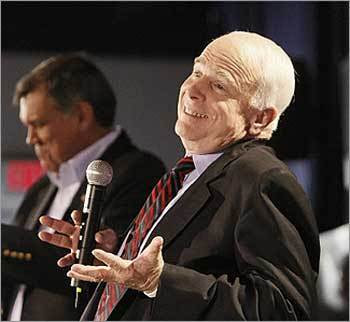 Nice headline, eh? I tell you, I have reached my limit with McCain, Palin, their campaign staff, and their sycophantic supporters in the media. Their pathetic, desperate excuse for a campaign is sinking badly. But rather than focus on the issues that poll after poll show the American people want the candidates to focus on, McCain has decided to run on a Karl Rove-style dishonest character assassination, race baiting, guilt by association, nothing but slander campaign in order to scare voters into believing a US Senator is guilty of treason. Treason. Make no mistake. That is what McCain himself, Sarah Palin, and the campaign are accusing Barack Obama of committing.

With no evidence whatsoever, Sarah Palin has been slandering Sen. Obama by saying he is "palling around with terrorists." When called out on it, she claimed that she was not the one that brought it up -- the New York Times did. Only they didn't. The article in question sums up the so-called relationship between Barack Obama and 60s radical Bill Ayers this way:

But the two men do not appear to have been close. Nor has Mr. Obama ever expressed sympathy for the radical views and actions of Mr. Ayers, whom he has called “somebody who engaged in detestable acts 40 years ago, when I was 8.”

How is it again that this article would give license to Gov. Palin to say they are "palling around?" It doesn't. Therefore, Sarah Palin is a liar.

These intentional lies are bringing out the ugliest impulses in her and Sen. McCain's Republican supporters. At a rally yesterday, McCain asked the question, "Who is the real Barack Obama?" The audience responded by yelling "terrorist." This slander can be heard clear as day, and McCain definitely heard it. Rather than correcting the record and doing the honorable thing, McCain said nothing. He then smiled approvingly with one of his creepy, ghoulish grins.

At a Palin rally in Florida, her supporters shouted racial epithets at an African-American soundman, and told him to "Sit down, boy." More classiness from the GOP. Even worse, Palin got the crowd to yell that Barack Obama should be "killed." Has anyone told Mrs. Palin and her devotees that threatening the life of a presidential candidate is punishable by jail time?

John McCain's own campaign advisers stated, on the record, that the campaign is trying to change the subject from the economy to character attacks. They have announced that upwards of 90% of their ads would be negative. But John McCain himself has said that if all you do is run negative ads, it shows that you have no vision for the future: 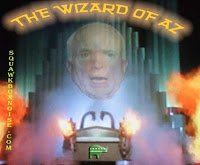 Now, let's look at some of the un-American associations that both John McCain and Sarah Palin have engaged in. In the 1980s, John McCain sat on the board of the extremist right-wing organization called the U.S. Council for World Freedom. The Anti-Defamation League called the organization "...a gathering place, a forum, a point of contact for extremists, racists and anti-Semites." To my knowledge, no one in the media has asked Sen. McCain to explain why he was "palling around" with racists and anti-Semites. But as a Jewish person, I'd like to know why at any point in his life, he saw fit to join an anti-Semitic organization. Whether or not you think Sen. McCain is anti-Semitic is irrelevant. He used his association with these radicals to gain support for his early Congressional runs, and had a much closer relationship to them than Barack Obama has ever had to Will Ayers.

Sarah Palin's associations with anti-American and anti-Semitic organizations is much more recent and much more direct. Her church in Alaska has turned over its pulpit to David Brickner, executive director of Jews For Jesus. Palin's pastor introduced him by saying "He’s a leader of Jews for Jesus, a ministry that is out on the leading edge in a pressing, demanding area of witnessing and evangelism." Hmmm....I wonder why the Anti-Defamation League has published a report on this radical, anti-Semitic organization titled, "Targeting Jews for Conversion with Subterfuge and Deception." At Mrs. Palin's church, with the Palin family in attendance, Mr. Brickner stated that recent terrorist attacks in Israel were God's judgment against Israelis for failing to believe in Jesus as the Messiah. Now, why didn't Sarah Palin storm out of her church after hearing this hate speech? Why didn't she complain to her minister? Why didn't she withdrawal from the church for allowing such a religious bigot to appear? Don't ask me, ask Sarah Palin. Oh, wait. You can't. She refuses to do interviews. I forgot. Now explain to me why it is that Jewish voters are supposed to support a ticket where both candidates have associations with anti-Jewish extremists?

Sarah Palin's husband, Todd (Alaska's "first dude") was a long-time member of the Alaska Independence Party. The AIP advocates Alaska's secession from the United States. Its founder, Joe Vogler said this of the United States, "The fires of hell are frozen glaciers compared to my hatred for the American government. ... And I won't be buried under their damn flag." Mr. Palin was a registered member of this party until 2002, when Sarah ran for Lt. Governor. Furthermore, the government of Iran sponsored Mr. Vogler's appearance in front of the UN where he condemned the United States on American soil.

At the 2007 North American Secessionist Convention, AIP Vice Chairman Dexter Clark said that Sarah Palin was also a part of the secessionist movement. On videotape, he said Sarah Palin was an "AIP member before she got the job as a mayor of a small town -- that was a nonpartisan job. But you get along to go along. She eventually joined the Republican Party, where she had all kinds of problems with their ethics, and well, I won't go into that."

Mrs. Palin spoke at the 2008 AIP convention and declared "I'm delighted to welcome you to the 2008 Alaska Independence Party Convention. ... Keep up the good work!"

What do Sarah Palin and the Confederate States of America (the South in the Civil War) have in common? A strong enough dislike of America to want to secede from the union. And she could be a heartbeat away from the presidency? Unthinkable.

From this point forward, there is no need to be nice or show any deference to John McCain or Sarah Palin. They are dishonest and dishonorable people. No Democrat should, from this point forward, preface any statement about McCain with any type of praise. He is unworthy. The gloves are off on the other side, and there is absolutely no reason they shouldn't be on our side as well. Fight fire with fire. To quote Bill Maher, you are playing on the "Blue Team." Don't forget it. Better dead than red, that's what I say.
Posted by Dave Splash

Looks like this year we are able to choose our candidate not only by his policies, but by thinking, is he a lesser liar. So, voters, defend your choice - who is competing honorably, and who is a bigger liar - Obama or McCain? http://www.votetheday.com/americas-20/presidential-candidates-bigger-liar-282

I don't know about your website, but the fact is that only McCain is outright lying in this election.

Anyone who thinks only one candidate is lying is a fool.

Nice proof of your assertion, Mr. Anonymous. Couldn't think of a single "lie" from Obama? Perhaps that is because this election is very one-sided: McCain-Palin lie, and Obama-Biden do not.

Spinning is not lying. Framing arguments in ways that benefit your point of view is not lying. But making up "close relationships" out of whole cloth is lying. There is a difference. There are still objective facts, despite years of the Fox News-ification of the media.