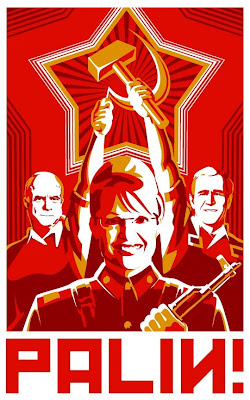 The Alaska legislature's investigation (led by 10 Republicans and 2 Democrats) into the allegations that Gov. Sarah Palin abused her authority as governor by unlawfully firing the state's Public Safety Commissioner has concluded that Palin is guilty of abusing her authority. The lead investigator concluded that Palin violated the "state ethics law that prohibits public officials from using their office for personal gain."

So much for reform. Palin is a typical, sleazy, corrupt Alaska politician who uses her power to settle personal scores. Guess she learned a little something while she spent all that time monitoring Putin and those pesky Russians. Now think what kind of power she would abuse if she was Vice President.
Posted by Dave Splash

That is a GREAT picture! I may have to steal it at some point!

I got my undergrad degree in Geography, and when she talks about being right next to Russia and therefore it makes her an expert, I just want to cringe. There is a place in the Bering Strait where the guys on the Russian island can see the guys on the American island if they use binoculars. Has Sarah ever been to that island? I wonder how often she has even been out of the Wasilla/Anchorage and Juneau areas.

She is absolutely full of it.

Steal away. I stole it from somewhere else myself.