Former Michigan Republican Gov: McCain "Not the McCain I Endorsed" 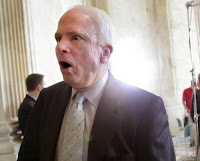 William Milliken, the former Republican governor of Michigan (and its longest serving governor ever) is re-thinking his endorsement of the erratic and unstable John McCain. He told the Grand Rapids Press, "He is not the McCain I endorsed. He keeps saying, 'Who is Barack Obama?' I would ask the question, 'Who is John McCain?' because his campaign has become rather disappointing to me. I'm disappointed in the tenor and the personal attacks on the part of the McCain campaign, when he ought to be talking about the issues."

Milliken is another in a long list of Republicans that have seen the disturbing turn to the far right in McCain's campaign and the hate stoking rallies that he and Sarah Palin are presiding over, and questioning their support for the former maverick. Let's hope there are a few other honest and courageous Republicans like Milliken out there.
Posted by Dave Splash