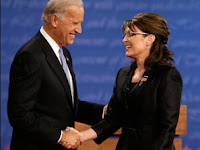 Reading through the blogs and the analysts' discussion of last night's debate, it seems that the only people who disagree that Joe Biden won are folks paid by the McCain campaign or other professional Republicans.

I will admit that Sarah Palin did better than I expected. But since I expected a repeat performance of her clueless, deer in the headlights interview style as exhibited in her interviews with Katie Couric and Charlie Gibson, that ain't much. Still, it took until about half way through the debate for Joe Biden to get his stride and figure out how to defeat the talking point reciting automoton known as "Sarah Barracuda."

And that really is what she showed herself to be: a talking point reciting automoton. She rarely addressed the question she was asked, she never countered any of Biden's critique's of John McCain, and she failed to articulate a single difference between a Palin-McCain administration and Bush-Cheney. In fact, my comment as soon as it was over was that Sarah Palin is the female George W. Bush. She's big on generalities, short on specifics, quick to attack, and when in doubt, exhibits absolute certainty. She did not let facts get in the way of her rehearsed, "folksy" comments. She was going to say what she studied, regardless.

As I said, it took Biden a little while to get into his groove up there, but once he did, it was over. He successfully showed that the policies advocated by Palin (on behalf of John McCain) are not different in any substantive way than those of the current administration. On economics, foreign policy, domestic policy, and taxes, there is no difference at all. Biden's strongest lines all focused on showing the shocking similarities between McCain-Palin and Bush.

Other notable instances came when Sarah Palin advocated the Vice President getting more power (a la Cheney, which should give any American pause) and Biden's emotional mention of the death of his first wife and daughter, and his being a single parent for a time. Rather than show any empathy, Palin followed this emotional moment with an attack. She might be good "on the stump," but she has a lot to learn about debate tenor following a non-partisan, emotional moment.

After the first Obama-McCain debate, I felt like it was a draw, but the polling showed a clear victory for Obama. In this case, I see a clear victory for Biden, and the polling echoes that. So, not much has changed because of the debates, so far. Unfortunately, next Tuesday's presidential debate is being moderated by Tom Brokaw. Brokaw is an unabashed McCain supporter. He is totally biased, and is the one responsible for having Keith Olbermann removed from the anchor chair of MSNBC's political event coverage. According to the New York Times, Brokaw has been acting as a liaison between NBC and the McCain campaign, and the McCain campaign promised to skip any debate moderated by NBC unless Brokaw was moderating. So, expect a tough night for Obama and easy sailing for McCain on Tuesday. 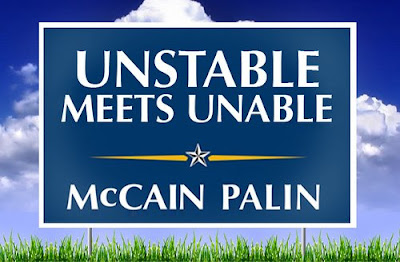 The next debate is in the format McCain has been begging for, that is, the town hall format. Don't know that it will save his sorry ass to have advantages at this point, he's so pathetic.

We can hope he won't be perceived as a "winner" in this next one, anyway! Or the one after that.