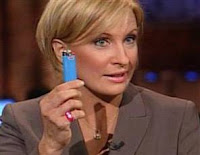 There seems to be this bizarre trend going on where Democrats and liberals (and I have, until now, included myself among them) spend their mornings watching MSNBC's new buzz show, Morning Joe. You know the show. The one hosted by right-wing, former Congressman Joe Scarborough and his wacky, wingnut co-host Mika Brzezinski. Well, I am not watching it anymore. I have already complained a couple of times about Mika shilling for McCain while she is supposed to be the "objective reporter" during her newscasts. That is clearly wrong, and unbecoming of a so-called serious journalist. But Brzezinski also claims to be a reporter on Morning Joe. I don't think she can credibly keep making this claim. Not after this morning's performance.

On this morning's show, Mika actually made the argument that any criticism of Republican VP candidate Sarah Palin (about policy, her personal beliefs, her ethics, or lifestyle choices) are inherently sexist. She simply cannot be criticized because she is a career woman, and career women should be immune from criticism. It's as simple as that. She can "do it all." Ignoring the fact that Palin is the least qualified person ever to be nominated by a major party for the vice presidency, Brzezinski made her case that since she (Brzezinski) can juggle her job and family, that Palin can, too, and that questioning Palin on anything is unacceptable. Simple as that. She said that it is "east coast elites" (a right-wing catch phrase) who are trying to attack Palin for being a working mom, and that is just not acceptable.

I, personally, don't care about Palin's kids (not even the 17 year old who is pregnant and unmarried). I care about the country, as a whole, and about the Vice Presidency. I have not seen or read anything about Mrs. Palin that would lead me to believe that this "Hockey Mom" knows anything about the national economy, climate change, energy policy, terrorism, Iraq, Israel (except that she believes Jews need to be converted to Christianity ASAP), Russia (despite Alaska's proximity), or really anything. What I do know is that she is a radical, evangelical Christian, her husband believes Alaska should secede from the United States, she believes that women who are victims of rape or incest should be forced by threat of imprisonment to carry their pregnancy to full term, that all forms of stem cell research should be banned (even with private money), and that the difference between her and a pit bull is lipstick. Am I missing something?

Why should she be immune from scrutiny or criticism? Because she is a Mom? Brzezinski's pro-McCain bias is becoming so pronounced that she is resorting to the RNC talking points that questioning McCain's choice of Palin is tantamount to an attack on working mothers. It is a ridiculous distraction that insults women, and the intellignece of the American people. If you will not seriously scrutinize Ms. Palin's views and record, and instead resort to characterizing all inquiries about her as sexism, then perhaps you should look for work at Fox News. They like blondes with big mouths and a willingness to say whatever it takes to advance the Republican party. Now that MSNBC has stripped Keith Olbermann and Chris Matthews of their anchor duties because of whining from the McCain campaign, perhaps Mika Brzezinski should similarly be removed from anchoring duties as well, Well guy I was just cruzing thru and saw your comment on old Mika.I admit that Im not a fan of the show they are trying to hard to be politically correct for fro the democrats. Its painful to watch them trying not to insult the wrong people in their party.

The reality is that Mika is the necessary pretty face to keep people interested.She is very pretty.I enjoy looking at her.She is just trying to protect her cushy excellent paycheck she gets there.And maybe one day she'll decide not to sell her soul as a journalist anymore and use her brains in another channel were she can speak up her mind and be a real reporter.but she is alittle hottie .!!JJ

Yeah, except for the fact that she and Joe Scarborough are Republicans who bend over backwards to paint the GOP in a positive light, I guess what you are saying makes sense...