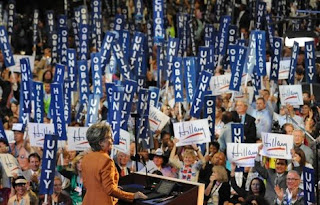 Okay, here's the deal. If you claim you are a Democrat, a progressive, a Hillary Clinton supporter, or any degree of a liberal, and you are still claiming that you are voting for John McCain, here's what you really are: a Republican or a racist. There is absolutely no other plausible reason for why you would refuse to vote for Barack Obama after Sen. Clinton's speech last night.

Is it Obama's age? He is older than Bill Clinton and John Kennedy were when they ran for president. That can't be it. Is it Obama's gender? Hmmm...then how could you vote for John McCain? Is it Obama's skin color? Are you not willing to vote for a black person? What does that say about you? And how can you consider yourself a Democrat if you harbor such prejudice? My guess is that you are not, in fact, a Democrat, but a Republican sabotuer who is trying to stir dissent inside of the Democratic party. There is no other explanation that makes sense. Elections are about issues. The Democratic and Republican parties have very different approaches to dealing with (or refusing to deal with) the issues. Hillary Clinton and John McCain are polar opposites on the issues that matter. It simply makes no sense that a Democrat who passionately supported Mrs. Clinton could do a 180 and support McCain. None whatsoever. So, the holdouts are either Republicans or racists. These folks deserve no more media attention.

Here is Hillary's speech. There is no ambiguity. If you supported Hillary, you must now support Barack. It's too important. "No way. Now how. No McCain!"

Great points. I can't wait to see the Republican Nazi propaganda machine roll out against Obama and the Democrats. I am sure it will be quite entertaining.