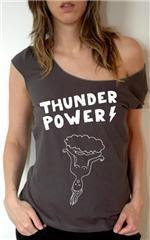 Yeah, so I guess it's Friday again. Whoopee!! This week was a clusterfuck. Work was hectic (more so than usual), I almost quit my radio show (I didn't, btw), and I missed two shows I had intended on seeing (Bob Log III and Hieroglyphics). Tonight is the CD release show for a cool local band called Thunder Power!!! at Slowdown (I posted a video of TP in action below that I stole off Omahype). Even though I'd like to go see the band, I wish the show was at someplace like Waiting Room. I don't like going downtown, and I don't like all the hipster bullshit associated with Slowdown. Despite being involved (in one way or another) with indie music since the early 90s, the staff at Slowdown does not seem to recognize my coolness credentials, and treats me like shit. I'll deal with it for someone like Stephen Malkmus, but for a local band, I'll just hit the next show. Moving on...

I am supposed to go out drinking tonight with a buddy of mine. His girlfriend is out of town, so he wants to really tie one on. Sounds okay to me. That should be fun. Tomorrow I am going shopping for a new refrigerator. For the last four years, I have had a fridge without a light. I know it seems like a minor thing, but it is annoying as hell. I found someone who wants to buy my old one, so now I can get a newer, better one - and one with a light! I can honestly say that I never thought I could get excited about a refrigerator, but I kind of am. I am officially old.

Tomorrow night is a benefit for the Peace Center at Waiting Room. Peace Center offers anonymous PTSD counseling to veterans, so it seems like a good cause. The line-up features a number of popular local bands including Orenda Fink (ex-Azure Ray). 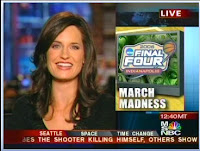 Not too much else to report on. The Olympics are almost over which is a huge relief to me. I HATE the Olympics. I can't really explain why, but I just do. And since NBC is covering it, all of their satellite channels like MSNBC and Universal HD have nothing but Olympics on. I've had to watch CNN for news. CNN!? Totally unacceptable. If I have to see some blowhard like Lou Dobbs one more time, I might kill someone. Seriously. Since when has every single political reporter/pundit on CNN been in the tank for McCain? It really was quite shocking to hear RNC/McCain talking points reported as news. They are definitely giving Fox a run for its money as most biased news network. And they have the worst daytime anchors. The worst. I'm having Contessa Brewer withdrawals. Does a "news" network really need to cover the Olympics 20 hours a day? I'd argue no.

Been listening to a decent amount of good, new music lately. Darker My Love is probably the best of the new stuff. They are opening the upcoming Dandy Warhols tour, which is not coming to Omaha, unfortunately. Also been digging The Weeks, who are a new band from Mississippi. They have some similarities to Kings of Leon (who also has a great new song called "Sex On Fire" out now), but rock out a little bit more. Even though I have only heard one song, that one tune from Jaguar Love is fuckin' sweet. The band features members of two Seattle bands that broke up last year (Pretty Girls Make Graves and The Blood Brothers). They are opening for The Faint on the 23rd at Sokol, so I will be able to hear more then. The new Colourmusic is pretty cool, too.