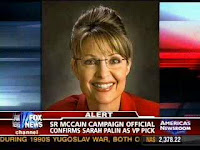 Admittedly, I don't know much about first-term Alaska governor, Sarah Palin. I do know, however, that prior to getting elected governor, Ms. Palin was Mayor of a tiny rural Alaska city. That is the extent of her experience. She ran on a promise of cleaning up the oil-soaked, corruption-filled government of Alaska, but is currently under investigation for ethics violations related to the firing of a state employee.

She is a former beauty queen and high school basketball player. But how does this political novice jive with McCain's claims that qualification for president revolves around years spent in Washington? His #1 attack on Barack Obama has been a so-called lack of experience, so McCain (a 72 year-old cancer survivor) chooses someone with less to be his #2. How ready will Sarah Palin be to assume the presidency if anything should happen to McCain?

This choice baffles me, and it reeks of desperation. It is almost as if the McCain campaign believes its own bullshit regarding the "rift" between primary supporters of Hillary Clinton and those of Barack Obama. There is no rift. The Dems are united, and even if they weren't, do Republicans think women are so stupid as to abandon all of their principles just to vote for a woman as #2 on a ticket?! Puh-lease! Oh yeah, and she has NEVER been to Iraq. How can McCain trust her judgment when he has said repeatedly that in order to know anything about Iraq, you must have already been there.
Posted by Dave Splash