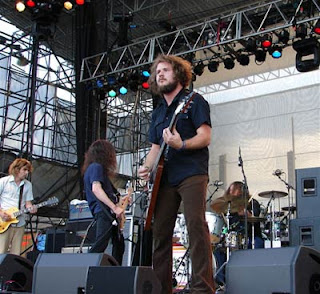 Man, so it's Friday already? Unbelievable. This week has flown by. I wish there was a lot going on that I could tell you about, but actually, there is not. I saw My Morning Jacket on Tuesday night. They were pretty amazing. I didn't stay for the whole show, because I really feel that no band needs to play more than 90 minutes. MMJ was scheduled for a 2 1/2 hour show with no opener. I bailed after two hours because I had already heard most of my favorite songs (Mahgeeta, Off The Record to name two).

As expected, the band played a lot from their new and kinda weak album, Evil Urges. I'm not as much of a hater as some, but I would be dishonest if I didn't say that the new record is kind of a let down. It has some good moments, but they are few and far between. Regardless, I see why many people view MMJ as one of the best live bands in the world. They were pretty great -- and very fucking LOUD.

The rest of the week I've just been sitting around waiting for Obama to name his VP choice. Actually, I've done other things, but this transitions nicely into what I was planning on writing about. As I'm writing this, the conventional wisdom says the pick will be Joe Biden. However, the conventional wisdom also said the nominees would be Hillary Clinton and Rudy Giuliani, so I'm not so sure. I would love it to be Biden as he was initially my first choice among the Dems. He knows how to effectively go after John McCain, and if the Republicans want to attack Biden with trumped up plagiarism charges from 20 years ago, I'm sure Biden is pretty familiar with the Keating Five scandal that nearly ruined McCain's career around the same time. One is clearly worse than the other, and McCain's camp would be wise not to overplay this.

In the last 24 hours or so, the name Chet Edwards has been thrown around as a potential VP. I don't know who he is other than a Democratic House member from Texas. And Nancy Pelosi likes him. But Texas?! Seems like a strange call. Bottom line: no matter who it is, it won't dissuade me from voting for Obama. I'd rather be anally probed by aliens than vote for John W. McSame. 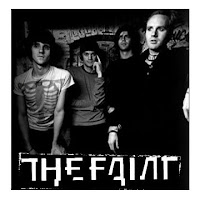 Moving on...this weekend The Faint ends the first leg of their tour with a show here in Omaha. The new record is pretty decent - not mind blowing or ground breaking -- but decent. I hear the light show on this tour is very impressive. That's one thing about The Faint...they know how to put on a show.

Honestly, though, I am a little more excited about one of the openers, Jaguar Love. It features former members of The Blood Brothers and Pretty Girls Make Graves, but is better than both of those bands.

The show is at Sokol Auditorium and is sold out. Two negatives in my book. When Sokol is packed it can be unbearable. I wish the band would have done two nights at Slowdown instead, but perhaps the light show wouldn't work there (or maybe because the club is owned by Saddle Creek and The Faint is no longer on the label) so that wasn't an option. Whatever.

I'm sure I'll have something to say about the VP choice when it's announced, so until then...
Posted by Dave Splash

Yeah, I'm not sure what picking Chet Edwards buys Obama other than proof he can work with moderates. It ain't gonna make any difference in Texas.

I like some of the tracks on the Evil Urges disc, and surpringly my favorite is actually Highly Suspicious. My favorite album of theirs is still It Still Moves, and I would go see them in concert if I could be guaranteed that they would play Steam Engine.

J. turned me on to some music by Rose Hill Drive that I think is very good. I have been listening to Retribution Gospel Choir, Sun Kil Moon, The National, Portishead and some other goodies lately... but I have still never heard The Faint! If you think they are pretty good, I will go check them out.

My daughter's birthday is coming up, and she lives in Portland where she goes to college. Some of the upcoming shows include The Dandy Warhols, The Helio Sequence, Fleet Foxes, Of Montreal, Ghostland Observatory, The Kooks, Yeasayer, Menomena and Cut Copy, with some of them sharing bills. I figure I can give her a hundred dollars and she can use it to see about six shows.

I wish I lived in Portland sometimes... !

Those Portland shows sound amazing. Opening the Dandy Warhols tour is a col new band called Darker My Love who is freakin' amazing.

Yeah, the Dandies and Helio Sequence played together up here in Seattle a couple weeks ago but I wasn't able to go. Damn.

Helio Sequence is pretty good on CD, but I think live is where they are best. I have never been as amazed by the amount and style of sound from a small band as I was by theirs. The drummer is a blast to watch! The Dandy Warhols are well worth checking out too... I think it would be nice to live in Portland where good, local bands like the Dandy Warhols and The Helio Sequence probably do two or three shows a year!

I'll have to check out Darker My Love now too, along with The Faint!