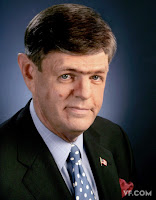 For the fine folks at Fox News, who refused to air any of Al Gore's speech from last night at the Democratic National Committee, I have decided to post it here. It was quite good, and a great warm-up for the main event of Barack Obama. My theory on why Fox would not air the speech goes as follows: Watching Gore talk about what could have been (rather than what was) the last eight years obviously gives Americans a serious case of buyer's remorse. It is almost universally acknowledged that a Gore presidency would not have yielded such disastrous economic results, or a failed foreign policy that tied nearly the entire US military down in one spot, leaving Americans powerless in other world situations. It would have been an administration that did not dismiss the Geneva Conventions and sanction torture. It would not have created a political litmus test to gain employment in the Justice Department. It would not have been in involved in any of the numerous other corruption and influence peddling scandals that have defined this administration....Americans fucked up in 2000. The Supreme Court fucked up in 2000. And we all know it.