Biden Is a Great Choice 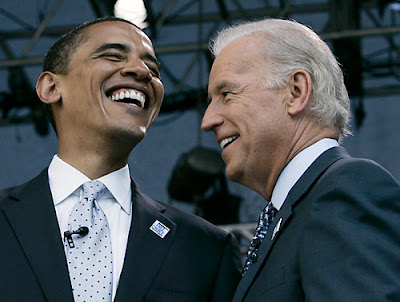 It's official. Joe Biden is the VP choice for Barack Obama, and I could not be happier. Last December, in a posting entitled "The Dark Stuff Choice For President: Joe Biden," I made my fondness for Biden known to everyone. I laid out some reasons why I thought he would be the best President. Well, Biden's candidacy did not take off as I had hoped, but fortunately, Senator Obama has given America another chance at having this great man in high office.

This is a solid ticket. To me, it is somewhat reminiscent of the Kennedy/Johnson ticket from 1960. In that election, LBJ was the more experienced of the two, but Kennedy had the vision, the passion, and the excitement. Kennedy laid out the agenda, and Johnson helped execute it. It was a very wise choice because, without LBJ, many of Kennedy's initiatives would have stayed bogged down in Congressional committees.

In 2008, it is Obama with the vision, passion and excitement, and Biden with the insider's knowledge to make it happen. I think Biden will play a strong role in an Obama administration, and is unlikely to run for president in the future, thereby assuring his devotion to making Obama's presidency a success.

I was worried that Obama would "double down on change" and go with a virtually unknown politician like Chet Edwards or Tim Kaine. But I think this model of having the #1 be a change agent, and the #2 be the one who makes it happen behind the scenes is actually the better way to go.

I don't see who the GOP could pick that could effectively counter Joe Biden. Tim Pawlenty? Puh-lease. Light weight. Romney? Flip-flopper of the highest order with no core convictions except religious ones, and his religion is a problem for evangelicals on the right. Lieberman? He didn't exactly help Al Gore in 2000, and he is so hated among moderates that he would drag down the ticket. Furthermore, the right will never support a pro-choice Jew. Ridge? Despite what the talking heads say, the GOP is, essentially, a single issue party. They are anti-choice. Ridge will kill the ticket. Jindal? KB Hutchison? Carly Fiorino? I don't see it. McCain is not a bold guy. He likes old white guys like himself. I am putting forth Bob Dole as his VP. How about a McCain/Dole ticket? They will bring America back to the glory days of their youth - the 1800s.
Posted by Dave Splash