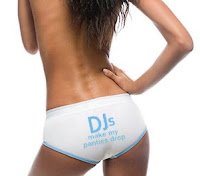 Well, it's Monday, so obviously I am still exhausted from doing my show last night. The show was great, by the way. New Dandys, Conor Oberst, Earlimart, CSS, Black Kids, and my current fave song, "Teen Creeps" by No Age (here is a live video of the song). Damn, I love that song! You know, for the longest time I was convinced that no one was listening to my show, and that it was a colossal waste of time. But recently it has not felt like that. I have actually been discovering that plenty of people listen (at least partially), and feel that it is the only worthwhile radio in Omaha. Personally, I wouldn't go that far, but if someone else says it...

Been spending this morning pretending to work since I did a lot of work over the weekend, and have almost nothing left to do. With little to do, the day is crawling. Why isn't it 5 yet!!?? I've been going online and looking into booking my next vacation, but the place where I work has blocked access to Northwest Airlines website. WTF? I understand companies blocking porn, but why block an airline? Especially since sites like Expedia are not blocked. Doesn't make much sense to me. So, I have to wait until I get home to see if there are any mileage + dollars deals I could get from the airline. At this point, I think I'm either going to New Orleans or Tampa. I lived in Tampa, so I know what I'm getting there, but I have never been to New Orleans. Any suggestions?

Tonight I'll be chillin' at home watching the new episode of Weeds (my new favorite show), and possibly the new Secret Diary of a Call Girl. HBO used to be it for TV, but I have to say that Showtime has overtaken them. With Dexter and Californication, The L Word, and Weeds, forget about it. HBO can't compete.

I also have two weeks worth of promo CDs to skim through before determining that they all suck, so I should have an interesting evening. I'll post more when I have more. Toodles.
Posted by Dave Splash

It's weird, I wonder what happened at HBO.

They dropped the ball and Showtime picked it up!

If you haven't seen the new season 3 trailer of Dexter you should check it out. It's pretty amazing