Are You Ready For the Good Times This Weekend? 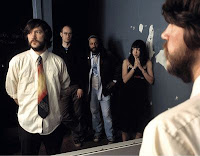 This ain't the summer love. And it also ain't the summer of rock (at least not until later this month). This weekend is once again lacking in quality shows in the Omaha area. I am ignoring The Good Life's show at Barley Street Tavern because that place will be too packed to even move, and though I've never seen Son, Ambulance, I can say with nearly 100% certainty that I will be skipping their show at Slowdown tonight (if interested T-Mac over at Lazy-I has a new interview with the band on his site).

Omahype is reporting the rumor that Saturday's set from The Good Life (opening the free Feist show at Memorial Park) will be their last ever, which would make the Barley St. gig their last club show ever. However, Tim Kasher frequently ends his bands and then re-forms them later, so I wouldn't count out a Good Life return some day. Therefore, I guess I shouldn't say there are no "quality" shows in Omaha, just none that I feel compelled to see. I still have the Film School show on Monday night to look forward to...

It's not as though I'll have nothing to do. I will be completing my next podcast (on the band Spain this time around) and doing two radio shows this weekend. I'll have my regular one on Sunday night, but before that, I need to tape my show for the 20th. Sunday's show will feature new Beck, Conor Oberst, The Faint, The Dandy Warhols, Ratatat, and much more. For my show on the 20th, I will be focusing on women in rock (more specifically, in indie and punk rock). So, expect to hear folks like Patti Smith, Juliana Hatfield, Babes In Toyland, Throwing Muses, Hole, and others, alongside newer artists like Rilo Kiley and The Duke Spirit. Assuming the WEEN show ends early enough, I will actually be able to listen to my show for the first time. How weird.

Beyond that, I don't have much to tell. I'll check back in when I have something. Have a good one.
Posted by Dave Splash