(AP) The Kiss Army fan club has an enthusiastic new recruit: Secretary of State Condoleezza Rice. In a departure from her normally staid diplomatic duties, Rice met the legendary glam rock quartet when they happened to share a hotel in the Swedish capital. Rice was in Stockholm on Thursday for an international conference on Iraq. Kiss had a sold-out gig to play on Friday.

"I was thrilled," Rice said of her late-night encounter with frontman Gene Simmons and bandmates Paul Stanley, Eric Singer and Tommy Thayer in the executive lounge of the Sheraton Hotel where they signed autographs and handed out backstage passes and T-shirts to her staff.

"It was really fun to meet Kiss and Gene Simmons," she told reporters, noting they seemed well informed about current events. The band had asked if she could stop by after she finished dinner with the Swedish foreign minister and Rice readily agreed, she said.

Simmons and his crew, who are on a European tour, weren't wearing their trademark stage makeup, but were recognizable as rock stars to even non-fans by their hair, according to State Department officials who were with Rice.

Rice, a classically trained pianist, said she has eclectic musical tastes ranging from Beethoven to Bruce Springsteen. Hard stadium rockers like Kiss are included in the mix and Rice said her favorite tune of theirs is "Rock and Roll All Nite."

But, she conceded she had never seen the group in concert.

In fact, although she frequently attends classical music performances, Rice claims to have been to only four rock concerts in her life. The first was in the early 1960s when she went as a 10-year-old to see Paul Revere and the Raiders in her home state of Alabama.

After her family moved to Colorado, Rice went at the age of 16 went on her first date with an Air Force cadet to see Smokey Robinson and the Miracles. She later saw Earth, Wind and Fire in Denver and her last rock and roll show was a U2 concert in Washington, she said. 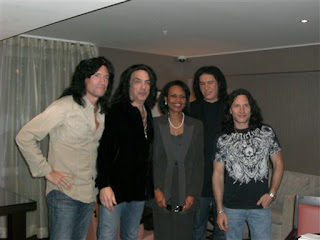