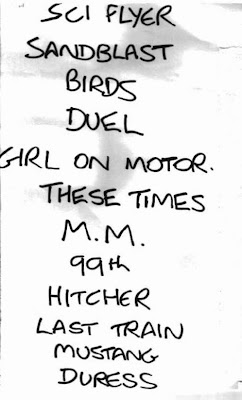 Holy shit. My ears are still ringing this morning from the Swervedriver show last night! I had no idea what to expect, really, so I guess the show exceeded my expectations. I've liked this band for over 15 years, and was finally able to see them live.

The set list (see above) drew heavily from the first two albums. There was only one song played from 'Ejector Seat Reservation' and only two from '99th Dream.' Oddly, they played a Toshack Highway (Adam Franklin solo band) song as well. I am hardly complaining, though. Getting to see the band play songs like "Duel" and "Girl On a Motorbike" was beyond cool.

There were only about 75 people at the show, which was a lot lighter than I hoped, but better than I had feared. It was a pretty busy week with Cursive on Monday and Rilo Kiley Tuesday and Wednesday. Still, that should not have prevented anyone from hitting this Swervedriver show last night.

The band was tight as hell, and sounded as though they had never broken up. I freakin' loved it. If the band is coming to your town on this tour, make a point of seeing Swervedriver. Oh, and bring ear plugs.
Posted by Dave Splash

Thanks for the set list. If the Adam Franklin solo track you meant was "The Hitcher," that was originally a Swervedriver B-side.

Yeah, that is what I meant. I hadn't realized it was a Swervedriver song first.

Too bad about attendance. One of the New York shows and the Toronto show have sold out so that is good news.