Lost Season 2 in the Can 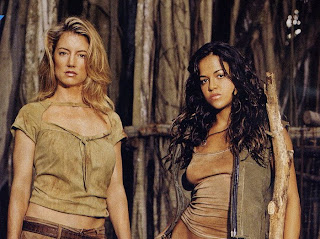 In case you were curious, I have just blazed through season 2 of Lost. I'm watching this show at breakneck speed, but for me, that is the way to go. No waiting until next week to see what happens - you just hit the button to start the next episode.

Since I'm still two years behind the rest of the world on this show, there is no point discussing all of the crazy revelations that came out during this season. I did want to point out what a shame it was that they introduced and killed off Cynthia Watros (Libby) and Michelle Rodriguez (Ana-Lucia) in just one season. I kinda liked the Libby character and wanted to see more of her backstory.

Oh well, one to Season 3. Disc one should be arriving tomorrow!!
Posted by Dave Splash

I was feelin' Libby too...Ana Lucia, not so much but that wasn't due to her character - it was due to the shorty who played her as ol Ty's never been a big fan of Michelle Rodriguez.

Do whatever you can to steer clear of teasers and Lost talk until you get caught up. I've got that joint lodged as the best show on TV tho I'm about to get into The Wire now that they've got it on iTunes.

I'll holler back and let you know how I think it measures up.

You're taking the right approach tho, homey. Blaze through them joints as fast as you can so you can to get 'caught up', then suffer from week to week with the rest of us fools.