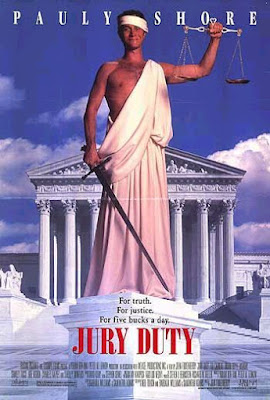 So, this week I got called for jury duty - federal jury duty no less. I've never served on a jury, and had always been intrigued by the idea. But now that I am a working adult, I realize what a tremendous hassle it can be to miss work and to be compensated a mere $40/day.

Well, I showed up this morning at 7:30 am, and after all the orientation stuff, I was called to be a potential juror. Obviously, I did not get picked or I would not be writing about this. The case was a drug case involving some trucker who had a bunch of weed in his truck and was traveling across the country. I guess he got busted here in Nebraska.

I found myself having something of a conflict, but wasn't sure if I should speak up while being questioned by the judge and the attorneys during jury selection. For example, I think marijuana should be legal. So, in a sense, I don't care how much weed the guy had, he should be able to have as much as he wants. I opted not to say anything about this because I felt I could still be objective since I didn't really know the facts of the case. Then the questions turned to prior experience with law enforcement. A number of potential jurors had friends or family members who were cops or who had worked in law enforcement. No biggie. Then, they asked about negative experiences with the police.

Now, I know that incidents when the police busted up a party in high school does not really qualify as a "negative experience" with the police. But, what about being falsely arrested when you're 27? It's a long story, but suffice to say, it was a case of mistaken identity and I was released after a few hours. Still, I had to pay to un-impound my car, and I was handcuffed for a number of hours. So, the experience did leave some negative after effects. I decided to mention the incident when questioned during jury selection; and I'm pretty sure that even though I said I did not hold a grudge against the cops, that the incident was enough to get me booted off. Oh well...

I may still have to report next week for a different case, so I am not totally off the hook.
Posted by Dave Splash

I've served twice and found it to be a fascinating experience--brings out the best in people. I highly recommend it.

You need to serve otherwise you have idiots as the jury listening to YOUR case!

Albert, you make a good point. In this case, however, I had a conflict right off the bat. If I had kept that to myself, it would have been unfair to both sides.