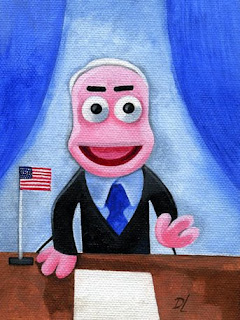 I don't expect the media to cover this story because they refuse to get up off their knees and stop blowing John W. McCain, but this story needs to get out. It has been revealed that the Reverend John Hagee, a spiritual adviser to McCain (and someone who McCain spent over a year soliciting an endorsement), has preached that the Holocaust was "god's will." Yes, the good reverend actually said that.

Hagee preached that Adolf Hitler was a "hunter" sent by God to kill Jews in order to force them to move to Israel. WTF!?

"Then god sent a hunter. A hunter is someone with a gun and he forces you. Hitler was a hunter. And the Bible says -- Jeremiah writing -- 'They shall hunt them from every mountain and from every hill and from the holes of the rocks,' meaning there's no place to hide. And that might be offensive to some people but don't let your heart be offended. I didn't write it, Jeremiah wrote it. It was the truth and it is the truth. How did it happen? Because God allowed it to happen. Why did it happen? Because God said my top priority for the Jewish people is to get them to come back to the land of Israel." - Rev. John Hagee, McCain's spiritual confidant

I don't know what is more shocking that someone could make such an idiotic argument, that John McCain refuses to denounce this blatant anti-semitism, or that the media refuses to give this whackjob preacher even 1% of the airtime given to Jeremiah Wright. There is nothing that Wright has said that is even marginally as offensive as what Hagee has repeatedly said.

Hagee has repeatedly argued that anti-semitism is the fault of Jews themselves, and that Israel must not negotiate in any form with the Palestinians or Hagee's dream of armageddon will not be realized. Yet for some reason, the media continues to obsess with Jeremiah Wright and Barack Obama's "problem" with Jewish voters, as evidenced in today's New York Times. How about some fairness and accuracy in the media?


UPDATE: Hagee has "withdrawn" his endorsement of McCain, and at around the same time, McCain said he "rejects" Hagee's endorsement. Yeah. Nudge nudge wink wink. The two are done with each other. Sure.
Posted by Dave Splash

McCain, previous to today's rejection of Hagee's endorsement, had denounced Hagee's "blatant anti-semitism" and anti-Catholicism, most notably on This Week with George Stephanopoulous (in the same interview, however, McCain said he was "glad" to have Hagee's endorsement). This has been widely reported in the media, in print, online, and on television.

Hagee is absolutely not a "spiritual adviser" to John McCain. They've known each other for less than a year. McCain knows hardly anything about the guy (Hagee Vetted Poorly by McCain Camp, but McCain has repeatedly failed to endear himself to religious conservatives over the past two decades (called Jerry Falwell an "agent of intolerance," is still hesitant to talk about abortion, gay marriage, etc.) He sought Hagee's endorsement because religious conservatives--a key Republican constituency--were going in droves for Mike Huckabee. McCain's never been a creature of the religious right, nor is the man himself very religious. But to be the Republican presidential nominee, you have to cozy up to these people, seemingly all of whom say controversial, crazy, offensive things on a plethora of subjects.

Hagee is a "prophetic" preacher, which means he thinks he has license to see certain Bible passages as predictions of present-day events. Thus the Hitler-Jeremeiah sermon. It should be noted that Hagee founded Christians United for Israel, a group of evangelical Christian leaders who lobby for Israeli issues. But yeah, he's still a son of a bitch in my book, someone whose support McCain never should have tried to obtain.

By the way, The New York Times' story today on Obama portrays voters' hesitation to support him as a result of "misinformation" about Obama's views. Lord knows Obama would never do or say anything Jews would find offensive (like sit in Rev. Wright's congregation every Sunday for 20 years, despite Wright repeatedly during that time calling Italians "garlic noses," blaming the US government for creating the AIDS virus, condemning American after 9/11, attacking Jews, etc.)

Look, every week since McCain got the Republican nomination, the Washington Post and NYT have run stories on McCain's ties to lobbyists and crazy people (including Hagee), his temper, etc. The NYT reportedly has a desk devoted to digging up dirt on McCain. He's not getting a free ride. Obama, on the other hand, has ties to equally crazy people (Bill Ayers, especially). Obama also has said multiple times over the past 6 months, until Monday when he altered his view slightly, that he wants to meet with Iranian leader Mahmud Ahmadinejad, a man who has called for Israel's annihilation (calls the country a "stinking corpse") and who funds terrorist groups like Hamas and Hezbollah that lob rockets into Israeli cities. This is what understandably makes Jewish voters nervous, as well as Obama's refusal to publicly reject and denounce his pastor's views until a few weeks ago.

Hagee sucks; McCain should be ashamed of himself for seeking the guy's support. Still, it's Obama who's getting a free ride on everything except the Wright issue.
Obama's ties to lobbyists
Obama's temper vs. McCain's