Cindy McCain Is Hiding Something 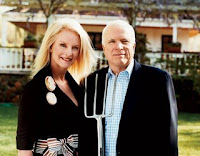 I think it's high time for an investigation of that recipe-stealing, bleached blonde appendage on John W. McCain's arm, his wife Cindy. The woman is a multi-millionaire who inherited a beer distributorship, she makes much more money than John W., yet unlike everyone else running for president (and their spouses), Cindy refuses to release her tax returns. She even said on The Today Show that if she became First Lady, she still wouldn't release them.

How interesting and how hypocritical of Mr. straight talk. What could possibly be the reason for the spouse of a presidential candidate to refuse, outright, to release her tax returns? The possibilities are endless. Questionable deductions? No charitable donations? Making money through less than honest means? Making money from corporations that are regulated by committees that were chaired by her husband? Who knows. Isn't that what the media is for?

I wonder what the justification will be for why the "liberal media" won't investigate.
Posted by Dave Splash