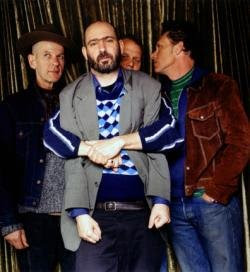 One of the best bands in late 80s/early 90s alternative music, American Music Club, is back and playing tonight at Waiting Room. They took a nearly 10 year break from 1994-2003 and band leader, Mark Eitzel, had an impressive solo career. Eitzel decided to reform the band and signed with Merge Records (Spoon, Arcade Fire).

The band's two "reunion" albums are amazing, and add to the band's strong legacy. The newest, The Golden Age, was released a few months ago. You can listen to some of the songs on the band's MySpace page.

Opening the show are The Third Men and Brad Hoshaw. Tickets are $10 and will be available at the door. Give this show a chance, you won't be disappointed.
Posted by Dave Splash

This blog rocks!
I will be visiting regularly.
Keep up the great work!